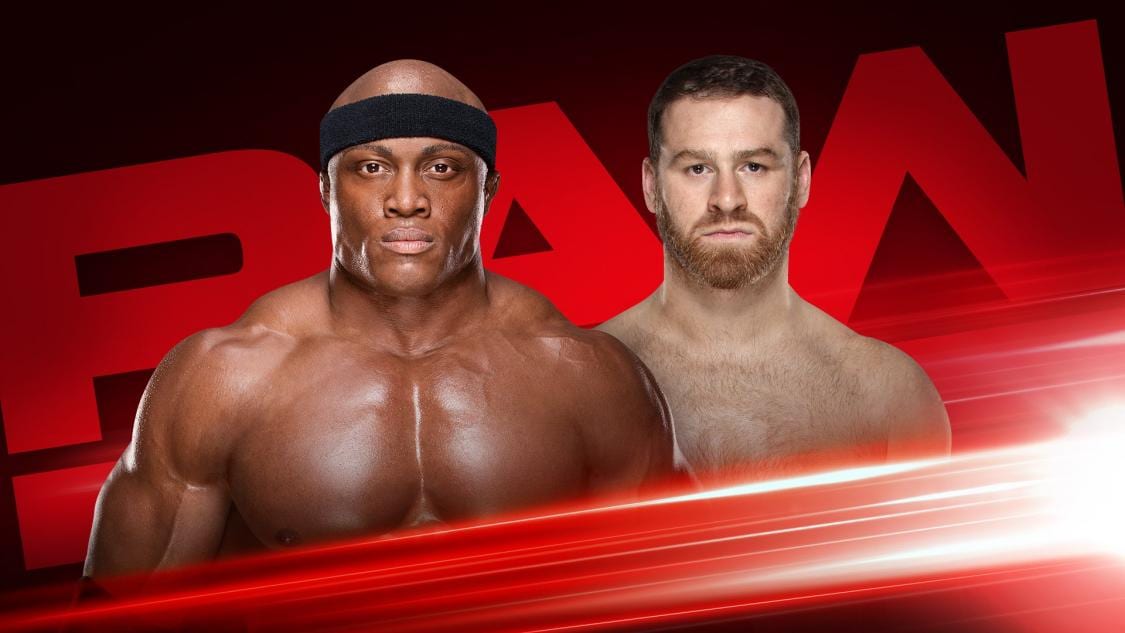 We return and Stephanie McMahon is in the ring for the contract signing. She says the world was shocked at the recent challenge heard around the world. She hypes Ronda Rousey vs. RAW Women’s Champion Nia Jax for Money In the Bank and introduces the champion first. Out comes Jax with the title.

Stephanie gives some props to Jax and says she has boldly chosen her next opponent. Stephanie introduces Rousey next and out she comes. Rousey taunts Stephanie, asking how her arm is. Stephanie asks if they’d like to have a seat. Stephanie says her arm is great and thanks Rousey for asking. Rousey and Jax take their seats. Stephanie asks Rousey how it feels to leapfrog the entire division, women Rousey has said that are more deserving than her. Rousey knows what Stephanie is trying to do but Jax challenged her. Stephanie wonders why Jax issued the challenge and says Nia is trying to make a name for herself at Ronda’s expense. She gives Rousey props for her WrestleMania 34 debut but reminds everyone that she hasn’t had a singles match yet. She goes on about the size and strength difference. Stephanie says Nia is hoping she will beat Rousey, sending her on her way out of WWE because she doesn’t like losing, and then she will be the baddest woman on the planet, not Rousey.

Stephanie also taunts Nia, asking why it took so long to beat Bliss. Stephanie asks Nia if she’s lazy. This goes on and Ronda declares that she won’t be able to get out of the armbar. Jax says she’s tired of hearing that lazy stuff, she’s been hearing it her whole life. Jax declares that she will beat Ronda at Money In the Bank. Jax signs the contract and stands up. Ronda signs next. Ronda approaches Jax and says she’s happy the truth came out. Ronda extends her hand for a shake and Jax shakes. Ronda says she is going to take the title, still holding Jax’s hand. Stephanie looks on. Rousey says she’s also going to take Jax’s arm. They step a little closer and face off as Ronda’s music hits.

Up next, Dolph Ziggler Vs. Chad Gable.

We return and out comes Dolph Ziggler with his partner.

Back from the break and the match is underway as Dolph Ziggler goes at it with Chad Gable. Drew McIntyre looks on from ringside. Gable takes Ziggler to school early on but Ziggler turns it around and connects with a dropkick. Ziggler works Gable over and keeps him grounded in the middle of the ring now. Ziggler drops Gable again for a 2 count.

The #ShowOff @HEELZiggler is ALL ??? as @WWEGable gives him everything he’s got on #RAW! pic.twitter.com/wCyFAnwZJV

Ziggler keeps Gable down on the mat with his legs wrapped around. They get back to their feet and Gable tries to fight out. Gable takes Ziggler down and rolls him for a 2 count. Gable with another 2 count with a bridge. Ziggler gets up and goes right for the knee. Ziggler gets fired up but Gable counters. Ziggler blocks a German suplex and hits a neckbreaker. Ziggler runs into an elbow in the corner. Gable avoids a superkick and rolls Ziggler up for another close 2 count.

Gable sends Ziggler face first into the turnbuckles and catches him in a German suplex for a close 2 count. Ziggler ends up suckering Gable into a headbutt and superkicking him for the pin.

After the match, Ziggler stands tall as his music hits. McIntyre enters the ring and takes his jacket off. Drew grabs Gable and levels him with a Claymore kick. McIntyre and Ziggler stand tall as we go to replays. Shame that match didn’t get more time, those two could produce fire.

Don’t worry. @DMcIntyreWWE has a statement to make of his own. #RAW pic.twitter.com/uInNgG9R3S

Still to come, Natalya vs. Dana Brooke vs. Liv Morgan vs. Sarah Logan in a MITB qualifier. Back to commercial.

We return and out comes Ruby Riott, accompanying Liv Morgan and Sarah Logan. Natalya is out next, with Dana Brooke already in the ring.

Dana Brooke Vs. Natalya Vs. Liv Morgan Vs. Sarah Logan

The bell rings and Liv attacks Natalya while Logan beats down Dana. Liv drops Natalya out of the corner while Logan works on Dana in the other corner. Liv goes to the top but Natalya rocks her. Liv comes off the top and covers Natalya for a 2 count. Logan sends Dana to the apron but Dana fights back. Logan levels Dana. Natalya goes after Logan and nails a snap suplex for a 2 count. Liv comes at Natalya from behind and screams at her. Liv misses in the corner. Natalya slingshots her off the top to the mat. Natalya with more offense and the basement dropkick to Liv for a 2 count.

Logan floors Natalya out of nowhere for a 2 count as Dana breaks the pin. Dana with a clothesline on Logan. Liv with an enziguri on Dana. Dana rolls to the floor for a breather. Liv is alone in the ring with Logan now. They stare each other down and look up at the briefcases. They laugh together before going to double team Natalya. Liv talks trash and strikes Natalya while Logan holds her back. They switch roles now as Logan drops Natalya with a forearm. Dana ends up pulling Liv to the floor and dropping her hard. Natalya goes at it with Logan in the ring onw. Natalya with the side Russian leg sweep and takes her down.

Natalya goes for the Sharpshooter but Ruby provides the distraction. This allows Logan to level Natalya for a 2 count. Dana comes in but Sarah takes her out by sending her into the ring post. Logan turns around to the discus clothesline from Natalya. Natalya applies the Sharpshooter in the centre of the ring and Logan taps out!

After the match, Natalya is interviewed by Charly Caruso. She says her experience is her greatest asset but she’s also best friends with Ronda Rousey, her training partner. She says that after MITB, Ronda will be the Women’s Champion, and she will be Miss Money In The Bank.

Up next, Bobby Roode Vs. Elias, again.

We return to see Elias in the ring with his guitar, ready to walk. He starts to insult Bobby and the city but he gets interrupted.

The bell rings as Roode tells the referee he’s good to go. Roode unloads on Elias to start. Roode keeps control and sends Elias flying over the top rope with a stiff clothesline as fans pop. Roode stands tall as we go to commercial.

Back from the break and Elias floors Roode with a clothesline. Elias with more offense and a 2 count. Elias drops Roode again for another close pin attempt. Elias keeps Roode grounded now but Roode fights up. Elias takes him right back to the mat and keeps him there. Roode fights up and out but Elias delivers a knee to the gut. Roode looks to build more momentum now. Elias blocks a neckbreaker but Roode counters that. Roode catches Elias in a big Spinebuster for a close 2 count.

Roode calls for the Glorious DDT now as fans pop. Elias counters and backdrops him for a 2 count. Elias with a knee to the gut. Elias runs into boots in the corner. Roode misses the Blockbuster and may have tweaked his knee as he sells. Roode with a swinging neckbreaker. Roode goes to the top but he’s moving slower than usual. Elias crotches Roode on the top. Elias brings Roode to the mat and nails the Drift Away for the pin and the win.

After the match, Elias stands tall as we go to replays. Elias leaves with his guitar as Roode recovers. Braun Strowman’s music hits as Elias makes his way to the stage. Braun comes running out and absolutely steamrolls Elias with a big shoulder. Braun heads to the ring for the main event as we go back to commercial. Unless this main event is special, I believe this has been one of the worst Raw’s in recent memory.

The bell rings and they both smile at each other. They meet and go at it, trading shots. Balor tries to bring Strowman down to the mat but Braun overpowers and clubs him in the back. Braun puts Balor back down with a big headbutt. Strowman stalks Balor and whips him hard into the corner. Balor smacks the turnbuckles and goes down. Braun screams out and we get a replay. Braun talks some trash, saying Balor is the reason they lost last week. Braun with another headbutt. Balor finally takes the knee out but Braun is still hobbling around. Braun floors Balor for a pin attempt. Braun tries to shake the left knee pain off as Balor recovers. Braun punts Balor through the ropes to the floor.

Braun follows to the floor and launches Balor back into the ring. Braun steps back into the ring over the top rope and points up at the briefcases, talking more trash to Balor. Braun with a big shot to the gut. Braun continues the assault on Balor while yelling out. Braun charges in the corner but Balor gets his boots up, and again. Braun charges again but Balor moves and he hits the turnbuckles. Balor with a kick to the face and more strikes. Braun just takes the chop, then drops Balor with a headbutt.

Braun with more offense until Balor sends him over the top to the floor. Braun catches Balor in mid-kick from the apron and drops him on his face. Braun comes back into the ring and clubs Balor to the mat. Braun asks Balor if he’s had enough. Braun picks Balor up and says he’s done playing with him. Balor delivers a shot but Braun just knocks him to the mat. Balor rolls to the floor. Braun runs around the ring but Balor meets him with a Slingblade on the floor. Braun goes down and Balor returns to the ring. Balor runs around the ring now and dropkicks Braun over the barrier into the crowd.

#CoupDeGrace from the BARRICADE! Can @FinnBalor pull this off?! #RAW pic.twitter.com/ixjNBijPGh

Balor rests against the barrier but Braun grabs him from behind. Balor fights Braun off and kicks him in the neck, dropping him at ringside. Balor breaks the count. Balor leaps off the apron with a stomp to the back of the neck on the floor. Balor jumps off the barrier and nails a Coup de Grace on the floor. Balor returns tot he ring as the referee counts on Braun. Braun barely makes it back in before the 10 count. More back and fort now. Braun misses in the corner when charging. Balor dropkicks his head into the buckles. Balor goes to the top for Coup de Grace but Braun grabs him by his throat. Balor slides out and runs the ropes but Braun catches him in a powerslam. Braun drops his straps and scoops Balor for the running powerslam and the pin.

After the match, Braun stands tall as his music hits. We go to replays. The referee checks on Balor but Strowman grabs him and takes him to the corner, standing him up against the turnbuckles in an apparent show of respect. Braun looks up at the briefcase and yells out. Braun looks at Balor in the corner before making his exit.

That’s it for this week’s Raw. Let us know what you thought in the comments and be sure to come back tomorrow night for SmackDown Live.