Russo comments on a WWE official apologizing for the botch at the end of the Roman Reigns/Brock Lesnar match from the Greatest Royal Rumble. He thinks it’s funny that the officials remain nameless for years, but the minute a finish gets botched WWE has them issuing public apologies.

Richards notes that the finish was dangerous and Reigns could have broken his neck. As we saw on Smackdown, Reigns continues to get booed and he thinks WWE should just turn him heel. Russo says this angle should have been all over RAW, and even if Lesnar wasn’t originally booked WWE should have paid him to be there so they could address that finish. 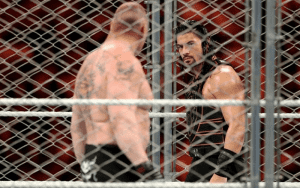 Russo says the “Moment of Bliss” segment was the best thing on RAW again this week. Hamin thinks WWE is listening to their advice on this show, because this promo sounded exactly like something he’d write. He adds that this was the only redeemable thing in 5-hours of WWE programming this week.

Lane mentions that Finn Balor’s “I like that butt” line had to be total rib on him. Hamin was shocked that after the controversy surrounding LGBT rights in Saudi Arabia, WWE decided to throw that line in there for Balor this week. Just when you think WWE is going to be promoting a positive image for the LGBT community, they throw something like that out there.