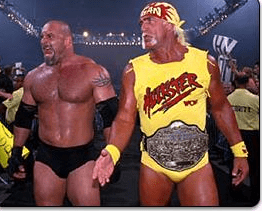 The former Universal Champion and headliner of the 2018 Hall of Fame class sat down with CBS’s In This Corner Podcast to discuss his new show on the History Channel and his most return to the ring for WWE. In the interview he reaffirms his gratitude for Brock Lesnar, and even debates on the similarities/differences between he and Steve Austin when they were at the height of their popularity during the Attitude Era. (Goldberg was in WCW at that time obviously.) However, when asked whether wrestling fans should forgive Hulk Hogan for his bigoted comments back in 2015, Bill had nothing but nice things to say about the Immortal One.

Oh, that’s not for me to judge. I think everybody deserves a second chance. I think you put [Hogan] in the locker room and give him the floor and let him speak his mind. That’s what he deserves. Who knows what happens from there but it’s not for me to say by any means. I can just give you my opinion and say that he deserves the floor and who knows where it goes from there.

There is always a mixed bag of feelings when someone gives their opinion regarding this topic. On the one hand, it’s nice to see a guy like Goldberg who has been on a strong path of kindness over the last couple years speak out and say that Hulk deserves a chance to be forgiven. On the other, the comments Hogan made, regardless if they were real or not, are still terrible, and a type of thinking that needs to be eradicated. One thing is for certain, Hogan doesn’t appear to be returning to the WWE anytime soon. (At least, not yet.) Listen to the full interview below.