Enzo Amore is no longer in WWE and has been relatively silent recently except for posting one message on his Instagram story featuring a Denzel Washington quote. But now he’s popped up once again on Instagram and he’s posting a rather strange message.

Along with a picture of some shoes tied around an electric wire, he said: “It’s been real.”

Whatever this means, we have no idea. But someone could read this message any number of ways. He could be hanging up his boots, but let’s just hope he’s ok. 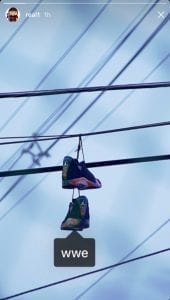