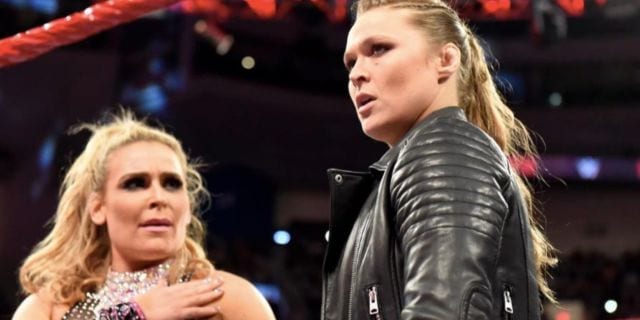 Ronda Rousey and Natalya are likely to form an alliance on Raw since Nattie jumped over during the WWE Superstar Shake-Up.

Dave Meltzer noted in the Wrestling Observer Newsletter how Natalya is likely going to turn heel eventually giving Rousey someone to feud with. But at this time it looks like Ronda Rousey is keeping kayfabe and posting a picture of her and Nattie training together.

Rousey included a description of the photo on Instagram saying: “Natalya showing me how to do the sharpshooter at Santino Bros Wrestling Acadamy – back when I was still training in secret before the Royal Rumble, she took the time to fly out just to help, was trustworthy enough to keep my training a secret, and passed along 3rd generation knowledge and experience I’m still clamoring to collect. Thank you for believing in me when I had been dismissed by so many others”

The two did train together, as did Nikki Bella and Charlotte Flair as they traded MMA holds for pro wrestling moves with the rest of MMA’s 4 Horsewomen as well. As you can see here, if Nattie and Ronda ever do end up tangling in the ring Rousey will likely know how to escape from the Sharpshooter because Natalya personally taught her the move.