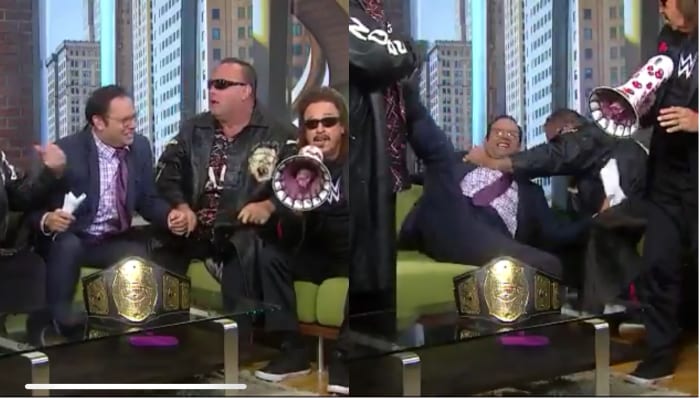 The Nasty Boys have quite a reputation at this point. Brian Knobbs and Jerry Sags have made a career pushing the limits and not being too friendly about it in the process. When someone calls them the Nasty Boys they live the gimmick.

The Nasty Boys and longtime manager Jimmy Hart recently appeared on Fox 2 in Detroit to promote an upcoming show and needless to say, things got out of hand.

Not only did the host end up getting choked in the process, but at one point the couch slides off the back of the stage causing Jimmy Hart to throw up his hands and megaphone while he claimed no responsibility for what just happened. That’s one way to get the word out about your show for sure.

Believe us, we didn't script @RyanEFox2 being put over the table by the Nasty Bosy. We also didn't script the very expensive vase smashing on the floor. But it TOTALLY HAPPENED and was AWESOME!https://t.co/DOQ5IBFRU8 pic.twitter.com/5XrYHX1ELA