Gilbertti opens today’s show by discussing his recent Twitter argument with Cody Rhodes. He informs that people often tag him in pictures and videos of performers getting hurt because he’s one of the only guys who is very outspoken about the lack of common sense in regards to injury prevention nowadays. He considers it to be an epidemic.

After Rhodes was busted open by a kick to the head by Kenny Omega, Gilbertti took to Twitter to voice his concern over the lack of safety in today’s wrestling business. Rhodes came back at Gilbertti with a vengeance, attacking him personally and critiquing his career. 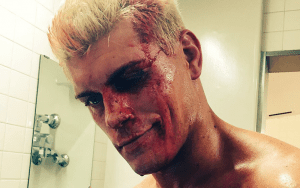 Gilbertti clarifies that his tweet had nothing to do with Cody Rhodes. It was meant to trigger the NJPW crowd who work recklessly because if they continue to work the way they work today, injuries are going to continue to happen. He notes that Cody Rhodes does not work that style, and he wasn’t trying to critique Rhodes in-ring work. Regardless, Gilbertti admits that if Rhodes thought he was attacking his work he can understand why he lashed out so aggressively.