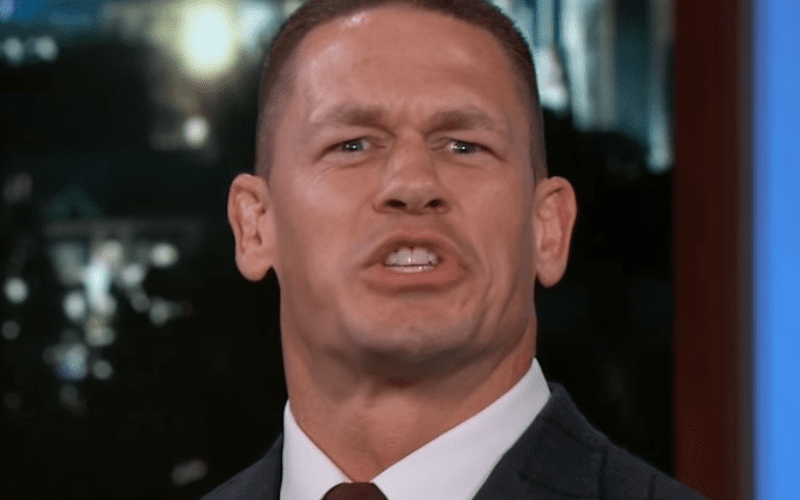 John Cena may be waiting for the Undertaker to respond to his challenge come Sunday, but that’s not stopping Mr. Hustle, Loyalty, & Respect from taking shots at one of his greatest rivals…The Rock.

The Brahma Bull already aired how he felt about Cena during a recent appearance on the Jimmy Kimmel show, detailing the real life heat going on between the two megastars on their path towards WrestleMania 28. (The show that would break all kinds of PPV buy records for WWE.) Now, Cena has fired back with his very own appearance on Kimmel, and cut one hell of a promo on the Rampage star to boot.

Listen up… Dwayne Johnson, if that is your real name. ‘Cause everybody around the world knows that your first name is ‘T’ and your last name is ‘Herock.’ You just pronounce it all stupid and that makes me even more pissed off.

Listen, if you think you’re making threats to me, think shoving a toothbrush up my bum is a threat, I’ve got some advice for you pal. And by pal I totally mean my best friend…. Watch ‘Blockers,’ and then watch it again. Because if you think shoving a toothbrush up my butt is a threat, you’ve got news coming pal. There’s been a funnel up there. There’s been a parking cone. There’s more traffic in that region than Monday on the 405 in both directions.

This means they’re main eventing Mania 35 for Thrice in a Lifetime right? You can check out the entire promo below.