Ryback comments on the announcement of the “Greatest Royal Rumble Ever” which will take place in Saudi Arabia. There has been some criticism to this announcement online, with some people pointing out that Women will be unable to compete there due to the societal norms of that area. Ryback points out that WWE can’t really control those kind of things, and he’s sure they’d have the Women competing there if they could.

Ryback sends his best wishes to Vader, who has had heart issues over the last couple of years. He points out that he just wants Vader to be healthy, after the big man has given his life to the business for the last several decades. Vader has said that he wants to continue to wrestle, and if he dies in the ring he’d be okay with that. Ryback points out that it’s nobody’s right to tell someone else what they should want, but he thinks there’s a time and a place for everyone to hang up their boots because health comes first. 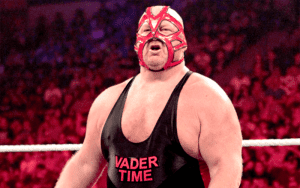 A listener writes into the show and asks Ryback for some advice on how to become a professional wrestler even though he’s just 5’2”. Ryback urges him to work relentlessly, find a way to make himself standout, and learn how to sell. He points out that an undersized performer needs to be more aggressive and intense than people would expect.

Ryback points out that it looks as if CM Punk will be returning to the Octagon for another UFC fight soon. He wishes Punk all the best, and he’d love to see Punk have success in his second UFC bout.