Backstage, Bayley is getting looked at by medical staff. Kurt Angle walks up and says those kendo sticks are no joke. He says she doesn’t have to put on a brave face and suggests she can have a straight up wrestling match with Alexa Bliss at Extreme Rules. Bayley says that isn’t fair and she wants a chance to prove her wrong. “I want my championship back. And I’m ready to get extreme,” says Bayley. Angle books Alexa Bliss vs. Bayley in a Kendo Stick on a Pole match at Extreme Rules for the RAW Women’s Championship.

Backstage, R-Truth apologizes to Goldust about last week. Goldust tells him not to worry about it and wants to show everyone what they are about tonight.

Finn Balor heads to the ring for his match with Roman Reigns.

Reigns with an elbow and big toss on Balor early. Balor with right hands to the body of Reigns in the corner. Reigns fires back with right hands to Balor. Reigns catches Balor with a quick samoan drop. Balor catches Reigns with a kick to the face on the ring apron, hits a series of forearms and then a dropkick to the face. Reigns blasts his shoulder on the steel ring posts and that looked nasty! Balor with a kick off the ring apron and then a stomp to the spine of Reigns on the outside. We head to a commercial break.

Backstage, Seth Rollins says if anyone is going to slay the beast, it is him.

Enzo Amore and Big Cass walk out to a big reaction in New Jersey. Enzo is from Hackensack. Loud “HOW YOU DOIN” chants in Newark.

Here comes Titus O’Neil and Apollo Crews to interrupt. Titus mocks Enzo and Cass. He tells everyone to get up and clap for the Titus Brand. Big Cass informs Titus that he is facing him tonight and not Apollo Crews vs. Enzo Amore. Titus says he isn’t about to wrestle in his expensive suit and shoes. Cass says the match will happen leading a “SAWFT” chant.

“Yes, we witnessed that everybody,” said Michael Cole on commentary.

After the match, Enzo Amore grabs a smartphone and starts to take a selfie with a downed Titus O’Neil and Apollo Crews nearby. Crews kicks Enzo in the head.

Seth Rollins vs. Bray Wyatt is up next.

Austin Aries vs. TJP is announced for 205 Live tomorrow night.

Backstage, Neville tells TJP he did good. TJP hints he still hasn’t received his title shot. Neville says the title shot is coming, but they still haven’t resolved the Austin Aries problem. He says “we will end this” tomorrow night on 205 Live.

Bray Wyatt with a quick takedown on Seth Rollins coming off the ropes. Rollins with a snapmare, kick to the back and then a kick to the chest combo. Rollins with chops to Wyatt in the corner. Wyatt misses a jumping cross body, falls out of the ring and Rollins launches himself over the top rope taking out Wyatt on the outside. Rollins drives Wyatt into the barricade at ringside. Rollins jumps off the barricade, Wyatt catches him and launches Rollins back first over the barricade with a modified Rock Bottom.

After the match, Samoa Joe tosses Rollins in the ring and kicks him in the corner. Joe plants Rollins and gets in a quick stomp. Bray Wyatt is back inside the ring and gets in the face of Joe. Wyatt and Joe both start kicking Rollins, who is still down. Wyatt and Joe tease working together against Rollins. Wyatt then grabs Joe and hits Sister Abigail. Wyatt starts smiling. Wyatt picks up Rollins and hits Sister Abigail on him. Wyatt drops to his knees to close the show. 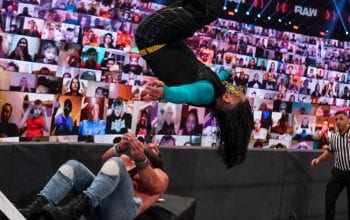 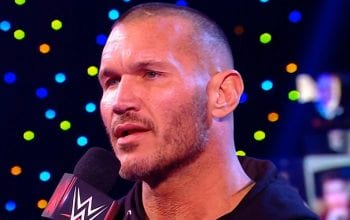 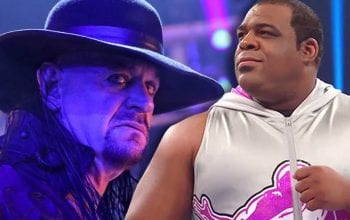 News Tip
wpDiscuz
149
0
Would love your thoughts, please comment.x
()
x
| Reply
You are going to send email to
Move Comment