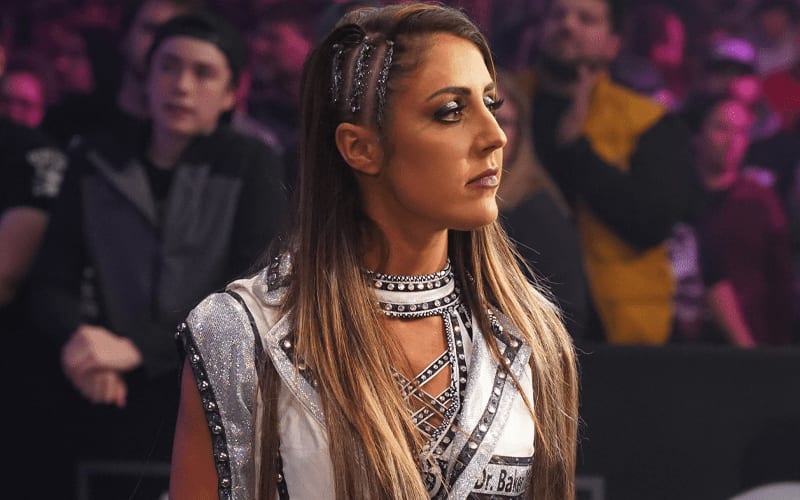 Britt Baker was the first woman that AEW signed other than Brandi Rhodes. The company pushed her as a big babyface, but that shifted eventually. Baker has excelled as a heel and it’s a good thing, because she was “scared sh*tless” as a babyface.

While speaking to Wrestle Talk, Britt Baker discussed that period in her career where AEW pushed her as a babyface. She had no confidence in that role after getting “plucked out of the indies.”

“I didn’t really have a lot of confidence (as a babyface). I was scared sh*tless. I was brand new on TV, I got plucked off the indies in front of 100 people and then wrestling in front of millions of people on TV. I literally had no idea what I was doing. I didn’t have a gimmick or a character or anything that I had a lot of faith in myself. It was just like, ‘Oh you’re the face of the women’s division. I’m like, ‘Okay but like, am I? I’m scared.'”

“But then being a heel, I literally just get to say and do and think out loud all the time and it’s so much fun, because you have to get comfortable with being uncomfortable. You have to be like, ‘What’s something right now that’s going to piss everybody off’. Which, in normal life, you wouldn’t do that, because you have filters that would stop you from saying that. Not in wrestling, you have to say it all, and for me that is just so fun. It’s like sick and twisted right, but it’s so much fun. And it’s just something that I can finally sink my teeth into, that I have my own ideas, I have my own way of how I would say or do something. And it’s confidence is what it is.”

Britt Baker has evolved considerably since starting out in AEW. Jim Cornette might not be a fan, but he doesn’t really love anything that AEW puts out. As the years go on, odds are Britt Baker will get much more comfortable just in case she ever circles back around to being a babyface once again.