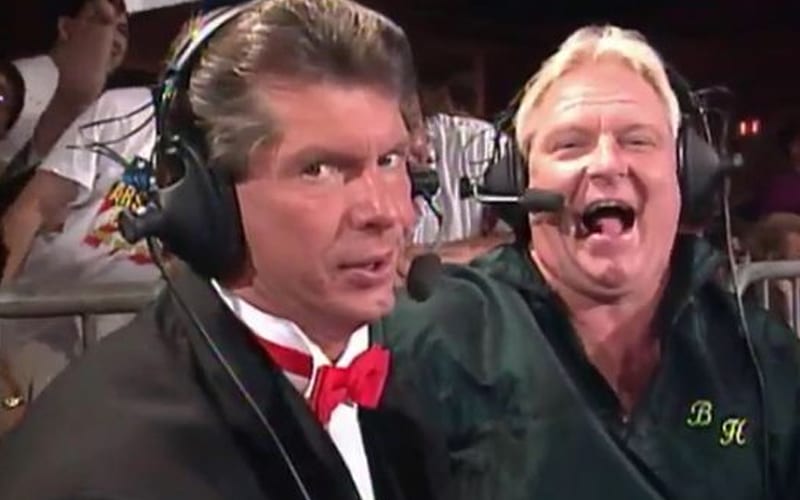 WWE Chairman Vince McMahon is a man of many talents when it comes to overseeing everything that goes on in his company. McMahon also used to be part of the commentary team during the old days of WWE.

It seems a WWE Executive Director wasn’t a fan of McMahon’s commentary. While speaking on Ask Bruce Anything, Bruce Prichard stated that McMahon was ‘terrible’ as a commentator.

Prichard stated that McMahon never actually called the in-ring action. However, he noted that no one could bring out as much emotion in commentary as Vince McMahon could.

“I’d say Jesse Ventura was the best with Vince. Look, Vince was terrible. Vince never called sh*t. It was like ‘Oh my, then from there, Yokozuna with an arm drag, wait a minute! He’s got him! One, two…oh no!’ (impersonates Vince McMahon). Vince’s clichés will take you on a ride however emotion-wise. I think you’d be hard-pressed to find anybody that could match the emotional rollercoaster that Vince would take you on.”

“Sometimes it was hyped up a little bit over the top, but it was, I mean, to this day, I still do the (mimics Vince McMahon). There were a lot of Vinceisms back in the day. ‘Oh, what a maneuver!’.”

Prichard also stated that McMahon never wanted to be a play-by-play commentary and was forced to do it out of necessity. Regardless, McMahon will be remembered for better than than his commentary skills.