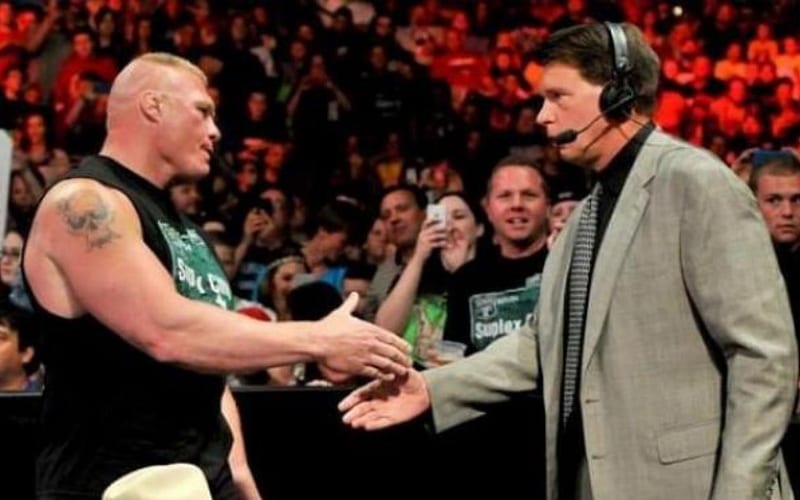 Brock Lesnar remains one of the most legitimate WWE Superstars to have ever stepped foot inside the squared circle, as he proved his dominance in pro wrestling and MMA. He is also known to be a prankster in the locker room.

While speaking on The Bolin Alley, former WWE Superstar JBL revealed an amusing story with Brock Lesnar. As the story went, Brock Lesnar his JBL’s hand while he was trying to eat some Lucky Charms as a rib.

Due to this, JBL decided to rib Lesnar back which almost resulted in Lesnar’s phone getting broken.

Brock and I are good friends. He’s sitting there and I’ve got some Lucky Charms in my hand. This was a couple of years ago. And I was just gonna pop them in my mouth. I was in catering… Brock comes by and hits my hand and they go all over the place. He thought it was funny.

I go by Brock and he’s on the phone and I hit his elbow and when I do I knock the phone down the hall. I didn’t mean to… I thought, “you know what, I’ll just keep walking.” And Brock grabbed me, pulled me in, and I said, ‘Brock, I don’t know what you’ve hurt, but you’ve hurt me somewhere. If you’ll let me go I’ll assess the damage. I promise.’ And Brock just, “HA HA HA HA HA,”

Brock Lesnar has not been seen on WWE television since WrestleMania 36, where he dropped the WWE Championship to Drew McIntyre. It is not known when Lesnar will make his WWE return.