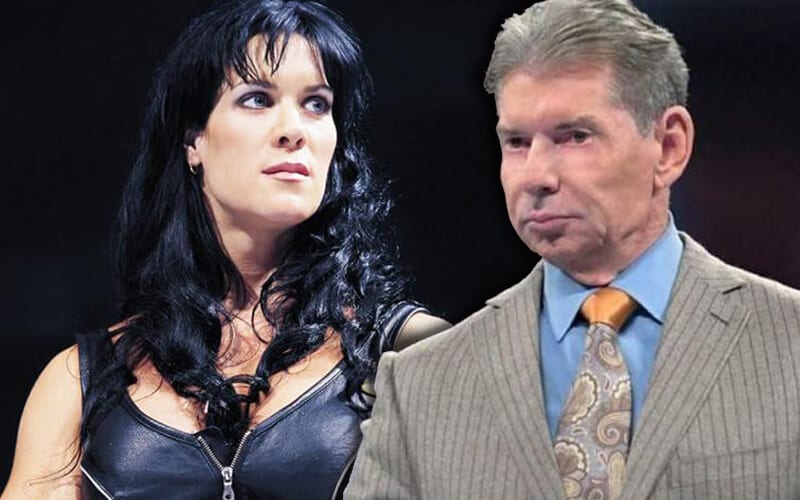 Chyna is a WWE Hall of Famer now, but she sadly passed away prior to being accepted back into the fold. She made plenty of memories in the ring and some of those occasions transitioned backstage as well.

During The Kurt Angle Show, he spoke about working with Chyna, which he had no problem doing. He enjoyed working with Chyna, but one missed spot caused Angle to cover the botch by punching Chyna in a face a few times. The brought wrath from The Chairman when he got backstage.

“I was okay with working with Chyna. She was actually very good in the ring, and she knew the basics. She was very basic but very, very effective. I enjoyed working with her.”

“The issue I had when I was wrestling her is, you know, Vince didn’t want anybody to punch her. And we were wrestling. Even though it was a quick match, I kind of messed up on a spot. To fill the messed up spot, I started punching her in the face. I punched her about four times to cover up the spot, and then we continued on.”

“When I got backstage, Vince was like, ‘What the hell are you doing punching a woman?’ I said I didn’t know, you know, I messed up on a spot, and I had to cover it. He was like, ‘Don’t ever do that again. She is a woman.’ I said, ‘Then why is she wrestling the guys? I don’t understand that.’ He said, ‘Well, she is a woman; you have to protect her.’ And I did, you know, when I hit her with the title, I didn’t want to mess up her face. I blocked it with my hand instead of hitting her with the title and just tried to protect her the whole time.”

Kurt Angle is now able to tell all of the stories from WWE that he previously had to keep hidden. Perhaps he has even more tales about Chyna to share in the future as fans continue celebrating the Ninth Wonder of the World’s career.