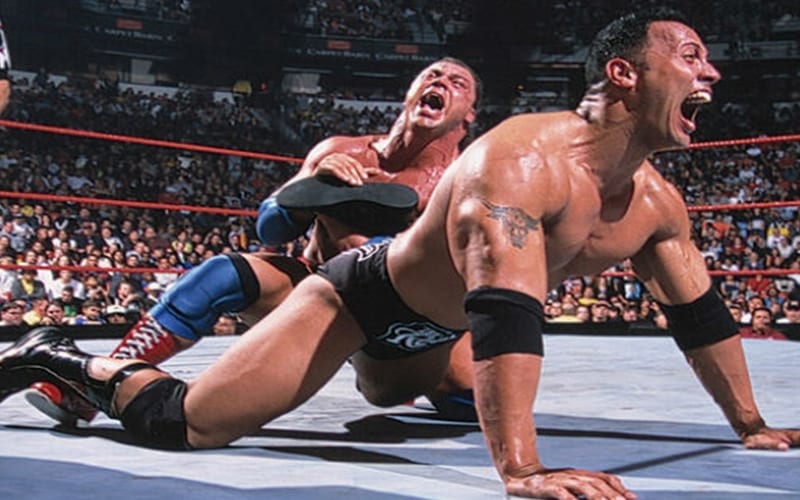 The Rock is the called the Most Electrifying Sports Entertainer on the planet for a reason. He wants to make sure that everyone in the building is entertained. This also shows in how much effort he puts forth when selling during his matches.

While discussing The Great One during The Kurt Angle Show, the Olympic Hero opened up about how some people complain about The Rock’s selling. It’s not that he no-sells, but some feel he sells too much. Angle had to explain that is all a part of Dwayne Johnson’s craft.

“You know, a lot of people think he oversells; that’s why he does it. He oversells because he wants everybody at home, every fan in the arena, twenty thousand people; he wants that little girl at the top of the rafter to see his selling, his face. So, he makes it visible to everybody, and he oversells. That’s the way you’re supposed to do it in pro wrestling. A lot of people undersell. Dwayne had it.”

Out of all the people who Kurt Angle put in his dreaded ankle lock, he had to give The Rock credit for selling it the best.

“The Rock was the best, and that’s because he let everybody see his face. A lot of people think that he oversells, but I think he is right on with it. You know, his style is all about selling. That’s what he does best, and that’s why he is so effective. Of course, you know, he can cut a promo better than anybody else, but, you know, the selling in the ring is what sells tickets, and he does it well.

We’ll have to see if The Rock ever wrestles again. We can only hope he has at least one more big match left in him. His movie projects and other commitments really keep him from taking that kind of risk. If he is able to wrestle again, you know that The Rock will give it his all.