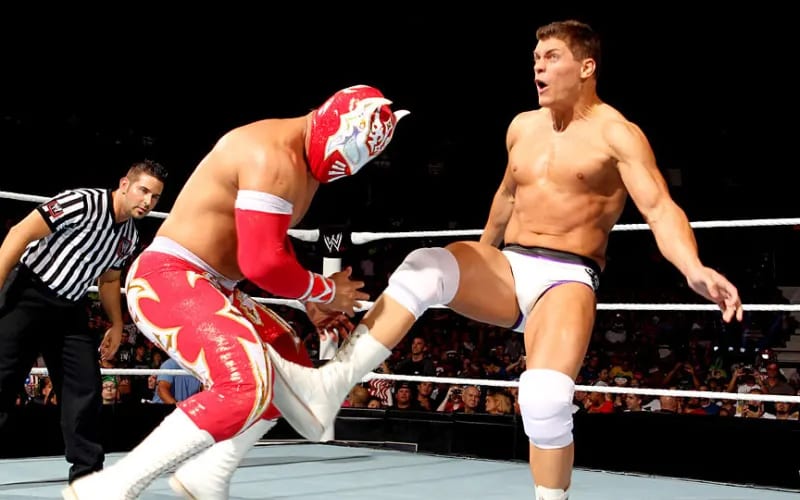 Former WWE Superstar Sin Cara was signed to the company with a lot of hype surrounding him. However, his run was ultimately disappointing and would eventually part ways with the company.

While speaking on the ARN podcast, Arn Anderson talked about the time Cody Rhodes had a shoot fight during a match against Sin Cara at a WWE tour in South Africa. It is to be noted that Sin Cara had heat backstage and was generally difficult to work with.

Arn Anderson had fallen sick the previous day, so he couldn’t watch the match. However, he did hear what happened during the match.

Cody Rhodes was said to have ‘beat the p***’ out of Sin Cara during the match.

Well, now I can’t even go to the curtains to watch the matches. I’m laying on a trainer’s table with those hot pads on me, shaking, shivering, puking in a trash can, running back and forth to the toilet. I mean, Ostrich sick! I got a real nice pair of Ostrich boots. Never occurred me to eat ’em. I mean the sh***. So, I’m getting reports from the extra referee, and he went; I told Cody, I said, ‘Go kid, it’s the last day of the tour. Go out there and show him what we do.’ And I’m getting reports, and Cody beat the pi** out of this guy and made him fight him. And all the hot spots went away, and it turned into a real good scuffle.”

“And I guess it was the best match that guy had to that point and one of the best matches Cody had, but it was about a half-a*** shoot.”

Cody Rhodes is currently engaged in a feud with Shaquille O’Neal and Jade Cargill in AEW. They are scheduled to have off in a tag team match soon.