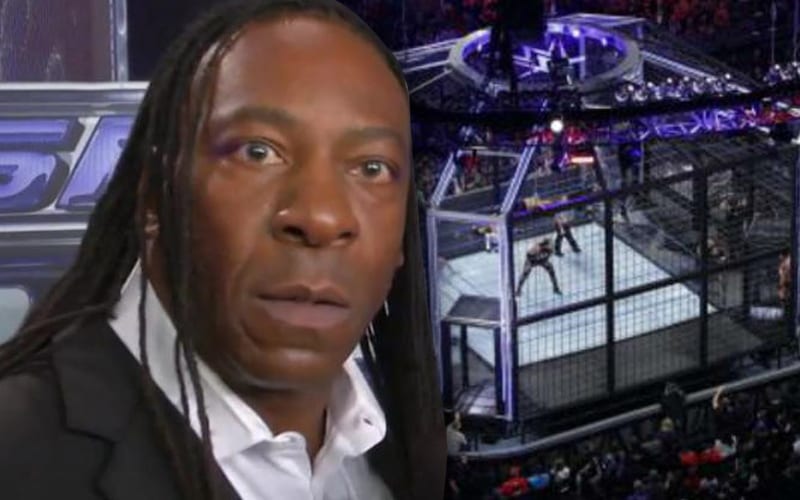 WWE Elimination Chamber is taking place this weekend, and we will have complete coverage right here at Ringside News. We’ll have to see how things turn out, but the unforgiving structure will be filled for two separate matches.

Booker T won’t be a part of the Elimination Chamber this year, and he’s happy for that. He never liked any of those matches in structures. He explained his reason for never leaping at the chance to be in those matches during his Hall of Fame radio show.

“The first Elimination Chamber wasn’t something you really wanted to be a part of other than the history making moment, being a part of something.  That for me was really cool. But, coming into WWF at that time, WWE now, those guys worked differently. They thought differently. They went out there and they were all about ‘bringing it, blood and guts.’ Man, just put me in the ring and let me work, collar and elbow tie up, shoot off the ropes, that kind of stuff.”

I just wasn’t into those structure type matches and I tell people all the time that I was totally out of my comfort zone when I was doing stuff like that. I really did not want to be there when doing that kind of stuff. I did not want to be tagged as one of the guys that when that time of the year comes around and these matches are to come up, this is the person that’s going to be in it. That’s why I was never in a Hell in the Cell match. I never lobbied for Hell in the Cell. I would never talk to anybody and say ‘Hey man, can you get me one of those?’

Booker T will be watching along with the rest of us as WWE Superstars put their bodies on the line this Sunday. Each Elimination Chamber match will have different stakes, but the danger is still going to be present in a match as unpredictable as that.