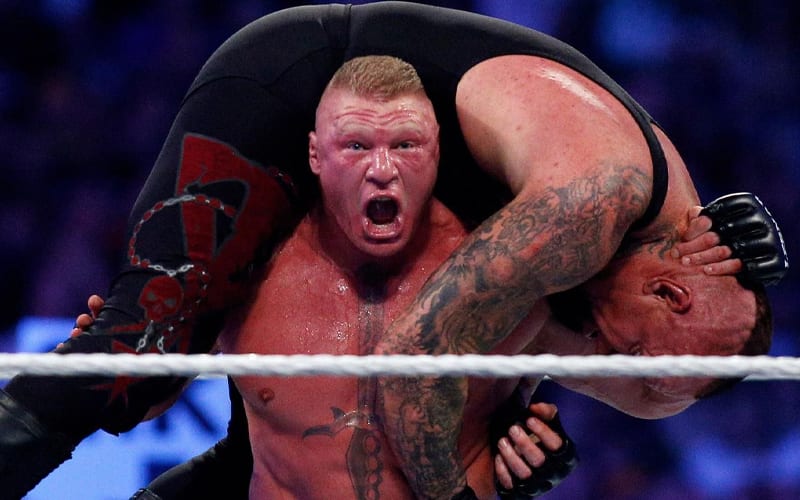 Brock Lesnar is one of the most dominant Superstars to have ever stepped foot inside a WWE ring. He is a force to be reckoned with and his F5 finishing move would usually signal the end of a match.

While speaking on the latest episode of ‘Monday Mailbag,’ former WWE referee Mike Chioda was asked if he liked a high-impact finisher or a submission move more. Chioda said that he loved any maneuver that was impactful. Chioda then added that while Brock Lesnar’s F5 is a move with a lot of impact, it does have a flaw.

Chioda elaborated by saying the F5 doesn’t look as impactful when performed on larger wrestlers such as The Undertaker or Kane. When Brock hit the move on smaller wrestlers, it looked like it would crush them.

“Yeah, I mean, the F5 move is definitely an impactful move. It depends on who he is going to hit it on. Brock used to hit it on like if he hit it on The Undertaker or Kane, or big guys like that, it didn’t look so, it didn’t look like a very impact move. No disrespect to Brock Lesnar, no whatsoever, but I thought, but when he did it to a smaller guy, it looked like it would crush them. And it depends on how the other guy would take the bump off of a finisher, but I was more of a high impact guy.”

Brock Lesnar has not been seen on WWE television since WrestleMania 36 where he dropped the WWE Championship to Drew McIntyre. We wonder when Lesnar will be making his return to the company.