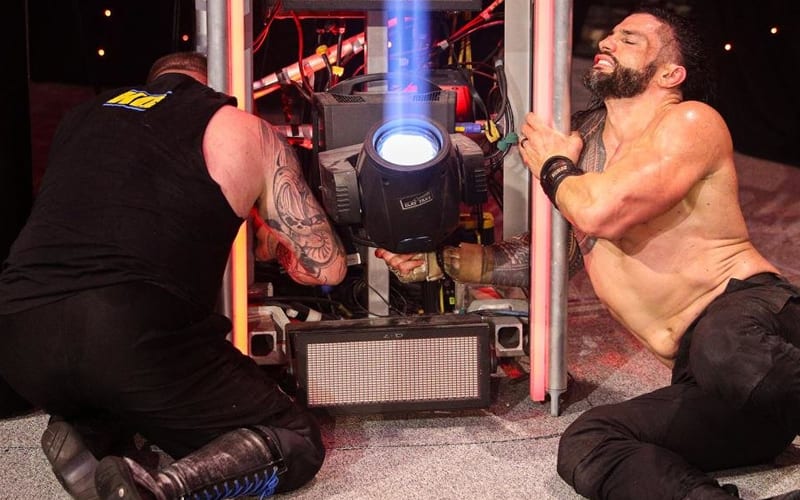 WWE’s Royal Rumble event wasn’t without controversy. Kevin Owens and Roman Reigns battled in a last man standing match, and there was a pretty big botch with the handcuffs during that match.

Click here for our comprehensive breakdown of what actually happened with those handcuffs at the Royal Rumble.

Kevin Owens recently spoke to The Jake Asman Show where he explained how hard of a night the Royal Rumble was for him. He’s also not very happy about the referee screwing up after the handcuffing spot.

“I’m still recovery from the Royal Rumble. It was a pretty rough night for me. I was thrown off a 12-foot platform onto a bunch of tables, I got hit by a golf cart, I jumped off a forklift that was about 10 feet in the air, I burned my arm on a light that was part of our setup, and to top it all off, I didn’t win because I think a referee got paid off or something. A lot to recover from. I’ve never been cheated by a referee that way before. I used to play hockey in Canada as a kid so you would think it would happen before.”

He went into more detail about that handcuffing incident. Things didn’t work out the way he planned at all, and he thinks it was an inside job. It also shows that you never know what to really prepare for in the heat of the moment.

“I had a few options on how to approach it. I could try to knock him out, but he’s a tough guy. I figured I could go after his legs so he couldn’t stand up, but it wasn’t working that well. He went a different route and tried to throw me off high things and hit me with vehicles. Different strategies. Towards the end, I turned his own trick on him. He brought handcuffs, I handcuffed him to something and I thought I had him, I really did have him. Some screw-ups from the referees and here I am, sitting in my car without the Universal Championship. It goes to show, no matter how prepared you are for a match in WWE, you never know how it’s going to go.”

Kevin Owens popped off a stunner on the Tribal Chief during the closing moments of SmackDown after the Royal Rumble. His feud with Roman Reigns is apparently far from over. Hopefully, WWE will be able to figure out a less complicated spot than that handcuff gimmick the next time they meet.