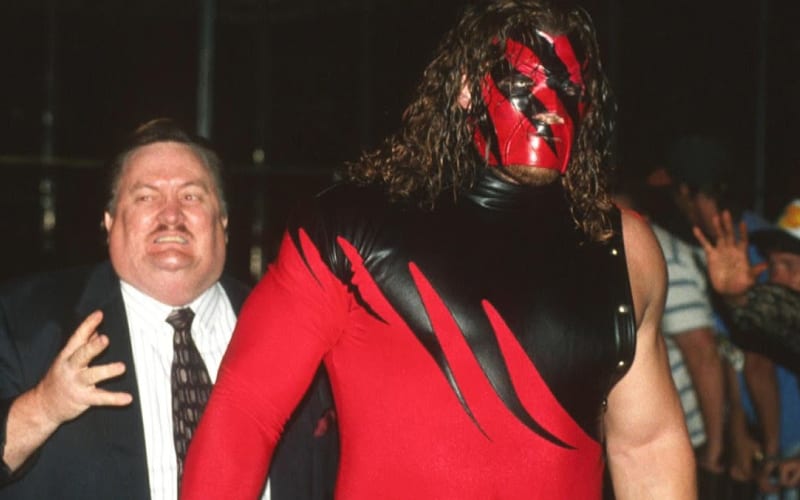 Kane debuted at In Your House: Badd Blood in 1997 and immediately took out his brother The Undertaker. That interrupted the first-ever Hell in a Cell match as well. Things were almost very different for the Big Red Machine.

During Something To Wrestle With, Bruce Prichard recalled WWE’s first intentions for Kane on the main roster. This included Brother Love as his manager.

The thought was to give Kane the same first manager that his brother, The Undertaker, had when he made his Survivor Series debut in 1990. It seemed like a good idea at the time, but all it took was one promo run-through and Vince McMahon nixed the idea.

“We actually had an idea for me to come back and end up managing Kane with dark red hair…Now, this was 1997-ish, maybe ’98, so it had to be right after that [Kane debuted at Badd Blood in October 1997]. Shortly after that. But the idea was that my hair was red, basically, the color of Undertaker’s hair and the idea was that I was going to come back under the auspices of helping The Undertaker feud with his brother Kane. We would basically do a kind of a switch, but after the promos, Vince [McMahon], classic Vince, can tell you that you’re a piece of sh*t and that it really sucks by telling you how great you are. Then you walk away feeling good but just sh*t all over.

We’ll never how how different WWE history might have been if WWE picked Brother Love as Kane’s first manager instead of Paul Bearer. Things seemed to work out in the end as it jumpstarted a new rivalry that led all the way to an incredible moment at WrestleMania 14 where Brother vs Brother finally went down on the grandest stage of them all.

Thanks to ITR Wrestling for the quote