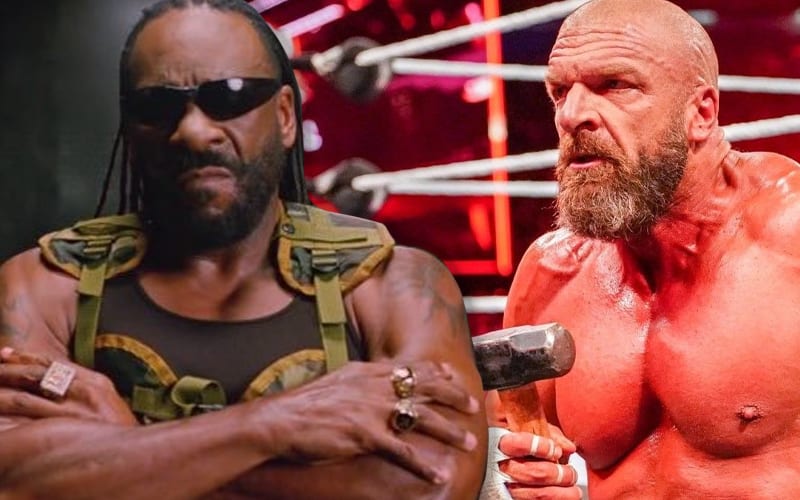 WWE’s deal with Saudi Arabia has brought a lot of dream matches to the country. The high-dollar price tag for those events helps the company bring in big attractions as well. Booker T is game to cash a big WWE check from a Saudi show as well.

Booker T said that he would certainly take on The King of Kings in Saudi Arabia for the kind of money they would pay him.

“If Booker T vs. Triple went down, it would have to be in Saudi [Arabia] because [WWE] are passing out big checks [to wrestle there],” Booker T said. “For me to get in the ring, the situation would have to be right. I would want to get paid. Somebody might say I’ve wrestled at my place, and yeah that’s my place and my job to teach my students and show them how it’s done sometimes. But yeah I would love to have another match, situations right, with Triple H.”

“The thing about that match [at WrestleMania 19], of course the ending wasn’t what most of the majority of the fans that night were wanting. So many people wanted me to win that night, I remember a couple of the office guys said, ‘Book you should have won tonight.’ Well, you wrote it. You had a piece of it, why didn’t you speak up?”

We’ll have to see if WWE books this match in Saudi Arabia. Booker T’s name could bring back the perfect kind of nostalgia that the Saudi Arabian fans would love to see attached to that show, especially if they can recreate WrestleMania 19 and hopefully bring some resolution for fans who are still upset about how it ended the first time.