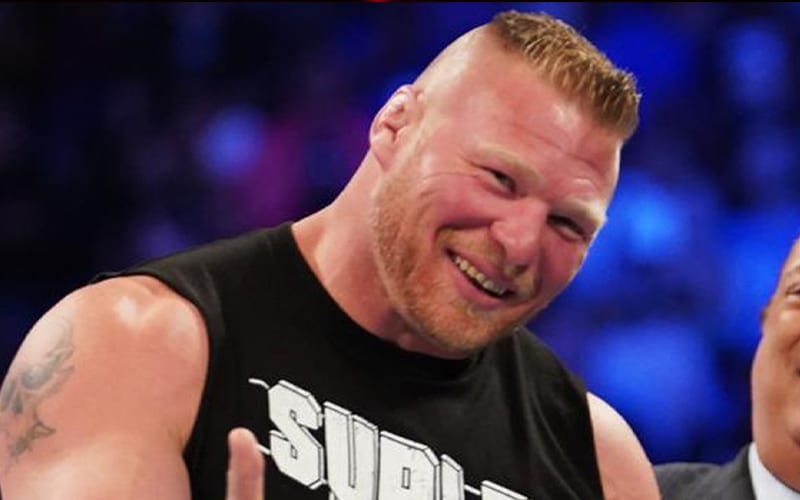 Brock Lesnar was the Next Big Thing prior to becoming the Beast Incarnate. It took a lot of maneuvering to get Lesnar to WWE in the first place. He was a blue chip athlete who could have found a home in a number of places, including WCW.

Vince McMahon told Gerald Brisco that his services were no longer needed in WWE. During that epic career in WWE, Brisco brought in several high profile Superstars, including Brock Lesnar.

During Monday Mailbag with Gerry Brisco on AdFreeShows, the pro wrestling legend discussed the process of bringing in Brock Lesnar.

“I saw Brock in his junior year of college. His coach just happened to be on the same recruiting team as I was for Oklahoma State University in 1964. Jay Robinson was Brock Lesner’s coach. Jay actually was the one who discovered Brock when Brock wrestled junior college…I called Jay and said I was interested in him, Jay said, ‘I’ll tell you what I will do. He has a short attention span and I don’t want to tell him you are interested in him now or he might call you and leave school a year early.”

“This kid is going to be a national champion. He is going to help us win a team national championship next year because I have a lot of the team coming back. If you give me your word that you won’t let him know you are trying to recruit him, next year after the national tournament, within a week after that national tournament, I will have him here in my office and I will give you a call and I might even have a bonus.’ I said, ‘you have my word.’”

“The next year came and nobody knew who Brock Lesnar was. The next year the NCAA Championships were on again. This year in the finals, two guys happened to be watching that weren’t watching the year before which were Jim Ross and Vince McMahon.”

Obviously, Vince McMahon and Jim Ross were interested in signing Brock Lesnar. This came as no surprise, and Lesnar was also willing to hear what they had to say.

Brock Lesnar has always been about the money, even early on.

“They see this 285 pound monster from Minnesota walk out on the mat and they see the same thing I see in this guy. Of course, Brock wins the national championship that year. J.R. called me the next morning because Vince already called him…I told J.R. the story from the year before…Jay actually called and said, ‘I have Brock with me and I’ve talked to him. He’s very interested in what you have to offer. Like I said last year, I have a bonus here with him and his name is Shelton Benjamin.’… We invited Brock backstage…Vince stopped dead in his tracks and made a 180 and came over, sticking out his hand. Vince introduced himself and Brock introduced himself.”

“Vince said, ‘I understand you won a national championship.’  Brock said, ‘Yes sir, I did.’  Vince said, ‘You ready to be an entertainer?’ Brock gave him the most perfect answer I’ve ever heard you can give the boss in his life and Brock turned and said, ‘Yes sir. I always wanted to be an entertainer.’  I saw a big smile come across Vince’s face. He turned and went up to gorilla. I told Brock you could not have thought of a better answer to give that boss.  Congratulations. You just got a job.”

Brock Lesnar is currently no longer under WWE contract. We’ll have to see if Vince McMahon backs another truck full of money up to his house. That seems very likely at this juncture because he’s done it several times before.

WrestleMania 37 will be a two-night event, and it stands to reason that Vince McMahon will see the value of giving those returning live fans a performance from the Beast Incarnate. If we’re lucky he’ll show up while still sporting that beard he’s been growing out.