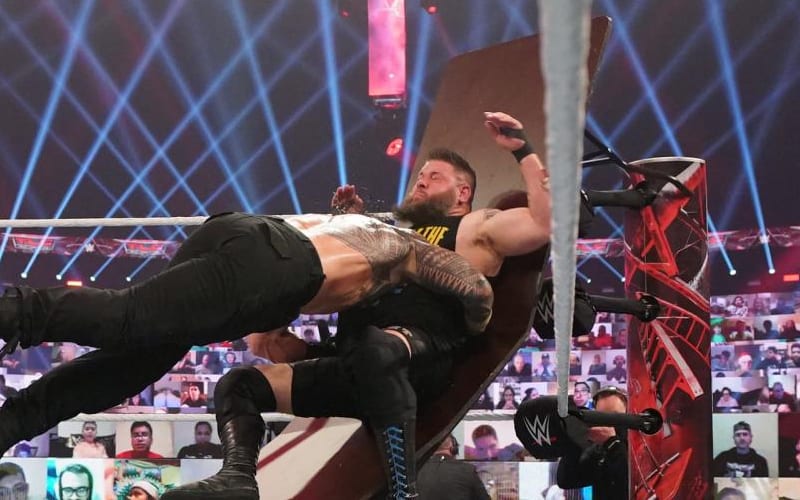 Roman Reigns has shut down plenty of opponents with his spear. That finisher can come in the blink of an eye, or he can gear up for it to give the move even more spectacle. He also has an opinion when it comes to who takes the move better above everyone else.

While speaking to Ryan Satin, Roman Reigns was asked who takes the best spear. He was also asked “what is the best spear you’ve ever given.” He also took a chance to compare his spear with Goldberg’s while throwing some shade in the process.

Reigns said that any spear where he gets a running charge at his target is a good one. He gave the nod to Rusev at SummerSlam. Then he picked AJ Styles for taking the spear better than anyone, but it’s also great any time someone can “cop a flip” for him.

“The best spear, that’s tough. I’ve hit so many of those things. So, I did it on two people on the ramp at SummerSlam. I speared Rusev at SummerSlam. That was a good night. I could show up and hit the spear and hit the bar right after. That one was pretty wide open. Any time I can get a really good run and launch.”

“AJ, I’m pretty sure he copped a flip. Murphy, he copped the flip, Seth [Rollins], all of those guys can cop the flip. To do it you kinda have to hit them and ricochet onto them and let them do kinda a barrel roll to allow them to get that flip, I didn’t know AJ was gonna do that so when I hit him I was still wrapped around him and I stopped him from rotating and he completely landed on his neck. It was not my fault, I did not know this, but it looked. I know he could have easily copped that flip, but we were not on the same page. Luckily, the match was over. All of those guys who cop that flip, and a lot of our guys are great athletes, it’s just a choice if they want to do it or not. Maybe we’ll make Kevin Owens do it.”

A ton of Superstars have taken the spear from Roman Reigns, but The Tribal Chief had to give the nod to AJ Styles. He said that AJ Styles can make anything look amazing, even when Reigns holds on for too long.