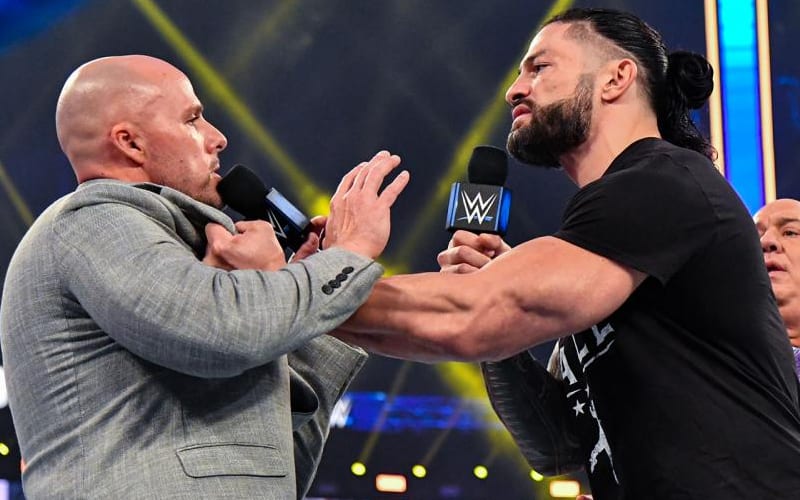 The current storyline featuring WWE Universal Champion Roman Reigns and Adam Pearce has gone through quite a few twists and turns, ahead of the Royal Rumble pay-per-view.

Adam Pearce was scheduled to face Roman Reigns for his title at The Royal Rumble. However, on last week’s episode of Friday Night Smackdown, Adam Pearce declared that he was medically unfit to compete in the match and announced that Kevin Owens would be replacing him.

It seems the current storyline has not been received well by a former WWE writer. While speaking on Legion of RAW, Vince Russo criticized Roman Reigns’ storyline.

Russo said that two weeks ago Paul Heyman pulled some strings to get Adam Pearce in a match. However, after what transpired on last week’s show, Russo questioned what happened to the strings that Heyman pulled.

Russo ended it by saying the storyline is at a point where it is meaningless and doesn’t matter anymore.

“Two weeks ago, Paul Heyman pulled some strings to get Adam Pearce in a match. The next week, Adam Pearce claims that he is not cleared to wrestle and puts Kevin Owens in the match. What happened to the strings Paul Heyman pulled? They could put anything out there, it doesn’t matter if it makes sense or if it doesn’t. They’re at the point now where it doesn’t even matter. When I saw the end of SmackDown, I’m like, “Are you guys serious man?”

Kevin Owens is scheduled to square off against Roman Reigns for the WWE Universal Championship at the Royal Rumble pay-per-view.

Do you agree with what Vince Russo said? Let us know in the comments below!