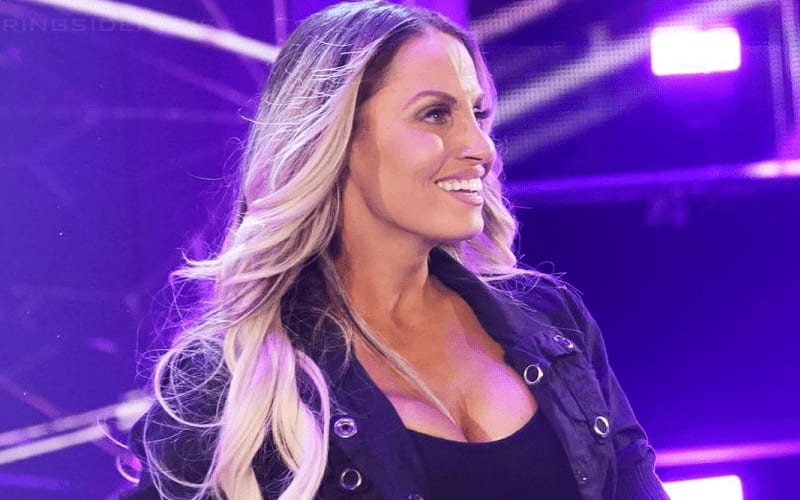 Trish Stratus never left the WWE family even though she retired and started her own family. She has interest in re-joining the company in some backstage capacity, but they will have to make things work out with her life outside of the pro wrestling business.

We previously reported that Trish Stratus is interested in a WWE Performance Center coaching gig. Her family situation makes it difficult for her to plan so many trips to Orlando.

The same is true for a producer job with WWE. Trish Stratus told Women’s Wrestling Talk would love take a role as a backstage producer. The issue is that she has two young children that she can’t continually leave.

“I would love to. I love the idea of it. The reality is it comes with the road, and I just can’t do the road because of my family at this point anyway. They’re young now. I have a three-year-old and Max just turned 7. So at this point, I just couldn’t go back on the road like that and leave my family like that. But yeah, I’d love to contribute in some way. It was nice to go back those couple of times and just work with the girls and see how their minds work and telling the art of storytelling and just working with Fit [Finlay] again.”

“It got me stimulated and him and I were in like this little — we just had this little connection when we were working together, and we would literally come up with ideas….you just have that with someone. So we had that and so I thought, ‘Man, we could put some great matches together.’ We would be co-agenting probably. We would be awesome but, yeah I would like to contribute in some way. I’ve talked to Matt Bloom, my former partner, about possibly going to NXT,” she continued. “We’ve talked about it on a number of occasions. It’s just like never the right time has come about to do that. But I’d love to work with young minds and that was the best part about Tough Enough was just to work with these kids and that sort of thing.”

A backstage producer gig in WWE isn’t as demanding now as it was prior to the pandemic. There are no more house shows, or traveling across the country to make live television. All production takes place at the ThunderDome in Tropicana Field right now.

We’ll have to see what happens in 2021. WWE could venture out and start booking arenas across the country once again. Trish Stratus might also work things out and re-join WWE on the road, because it sounds like something she’s more than game to try.