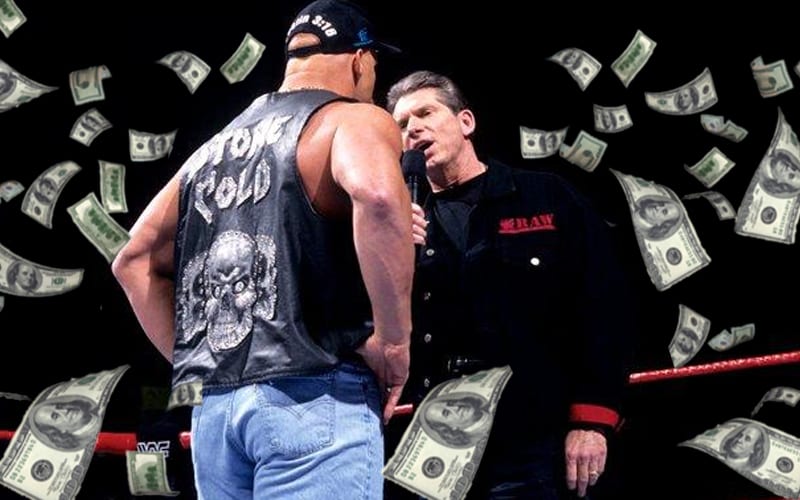 Steve Austin and Vince McMahon had a tumultuous relationship on screen, but there was never any real heat there. There was a time with the Rattlesnake cost Vince McMahon $14,000 during a television tapings.

While speaking to the Pat McAfee Show, Steve Austin revealed that one of his post-match celebrations cost the company a lot of money. Austin was having a great time making sure that fans left happy, but that extra time cost McMahon’s company $14,000 to keep the unionized crew around.

“A lot of times we would do that at a TV taping just because the crowd was there, and they’d crash the music and I’d go back down. Maybe I’d already done an interview or wrestled a match, and I’d go out there just to entertain the crowd and make sure they came back happy. One time I just kept staying out there, staying out there. It was somewhere in New York where the union was involved. Finally, I went in, and Vince calls me into his office the next day.”

“He goes, ‘Goddamn, Steve, you cost me $14,000 extra dollars last night.’ It was overtime on the crew. So he’s calling me out because I just cost him $14,000 just for that crew to stay overtime. I’m like, ‘I’ll split it with you.’ He goes, ‘Goddamnit, I don’t want your money. I’m just telling you. Come on in a little bit earlier.’ We used to do that shit all the time. Towards the end – Kevin Dunn in the truck – he’d finally just get on the horn to the house and go, ‘Steve, come on in.’ That’s how we rolled back in the day, man. We were gonna give you your money’s worth.”

Steve Austin wanted to make sure that WWE fans got the most out of every performance. That meant a little extra time in the ring. He learned a valuable lesson that night, but at least he didn’t have to chip in on the $14,000 tab that he racked up for The Chairman.