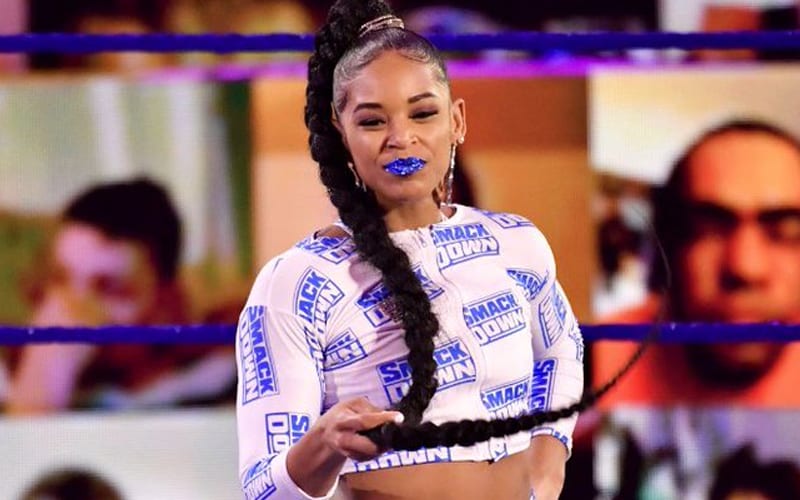 Bianca Belair is finding her feet on SmackDown, and she’s set to have a big match against Bayley this week. There were much different plans for Belair, but the COVID-19 pandemic changed them around.

While speaking to Inside The Ropes, Bianca Belair stated that plans for her WWE main roster debut were switched around due to the pandemic. They were going to bring her up after her NXT Women’s Title match in Portland, but TakeOver wasn’t her final date with the black and gold brand after all.

WWE moved locations to the Performance Center and that caused her debut to take place in a way she wasn’t expecting. The EST of WWE still made the most out of the opportunity.

“Yeah, so when I was in NXT, I had my title match at TakeOver in Portland with Rhea, and that’s when I found out that was going to be my last TakeOver in NXT, I found out that I was going to actually be debuting the RAW after WrestleMania – which I was very, very excited about, because, you know, if you want to debut, you want to debut on the RAW after WrestleMania. It’s the biggest RAW of all time. So I was super, super-excited about that. And then it kind of switched to, ‘Well, you might be debuting at WrestleMania.'”

“So I was really on a high like ‘OK, this is all coming together and I’m going to finally get my moment.’ And then the strange year happened and I found out, ‘OK, you’re still going to debut at WrestleMania…but inside the Performance Center and it’ll be alongside The Street Profits.'”

“So much has happened. It’s been a very strange year, but I’ve had a very good year when you think about this whole entire year. It started with Royal Rumble to all the different Takeovers, to TakeOver Portland, debuted at WrestleMania alongside my husband – and being able to share that moment with him, to being drafted to RAW, to being drafted to SmackDown, to being a part of a Survivor Series team with Team SmackDown… I’ve had had a very great year. Even though it’s been kind of crazy and it’s just everything has just been thrown at last minute, you just kind of have to learn how to adapt to everything.”

“That’s how you have to be here. You have to always stay ready because stuff is always going to be thrown at you. I feel like I’ve always just been on my toes ever since all this strange stuff has happened with COVID and it’s just… It’s been a crazy ride, but I always try to focus on the things that I can control. And right now, I’m on SmackDown and it’s the land of opportunities. I think that everything’s been going on a roll ever since I’ve been on Smackdown.”

Bianca Belair is a product of the WWE Performance Center and, if given the proper booking, she could be a huge star for the company. Paul Heyman certainly sees big things in her, and she recently spoke about how big of a moment it was to hear those supportive words from the Advocate.