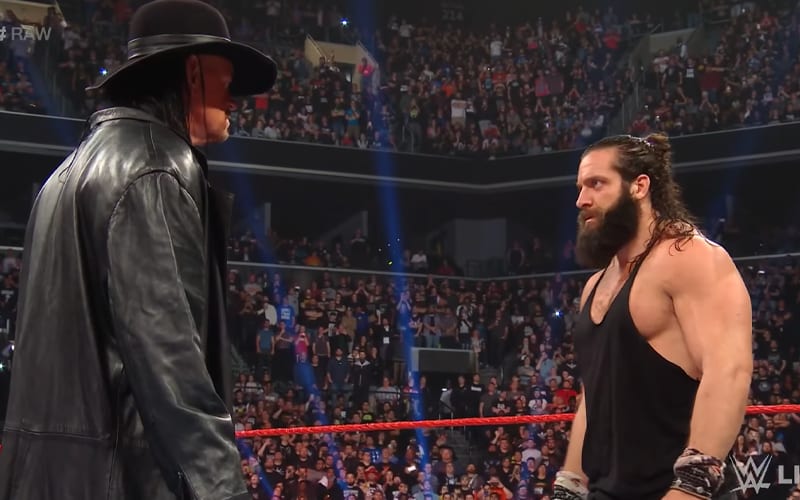 The Undertaker is a WWE legend and there is a certain way to go about things in pro wrestling. A backstage culture of respect exists with certain etiquette to be kept. Elias understands this which is why he played it safe and asked permission before wearing a hat when facing The Undertaker.

While speaking to Lilian Garcia on Chasing Glory, Elias talked about the times he worked with The Undertaker. They had a few encounters, and one WrestleMania match that was scrapped.

Elias wore a hat before facing The Deadman in a tag team match at Madison Square Garden. The Drifter got The Deadman’s permission before wearing that hat because he wasn’t about to be accused of gimmick infringement.

“Getting to work with him, he was one of, if not my favorite wrestler growing up. I remember having a match with him at Madison Square Garden. It was the main event. It was actually a big tag team match. I opened it up with one of my songs. I was wearing a hat, which I had to get approval from the dead man because it was like a cowboy hat.”

“I played a song on guitar. I remember a lot of the ideas that I wanted to do. I can remember seeing interviews my whole life when you hear his music, you get chills. I remember thinking I’m not in the main event at Madison Square Garden. That’s not going to get me. Sure enough, when his music went off and Madison Square Garden went crazy and you hear that gong, I got goosebumps then. Then when he came out, it was like the next level. Then when I actually saw him, I can actually feel that moment now.”

The Undertaker gave his Final Farewell at Survivor Series, and that is likely the finishing touch of his in-ring career. Elias certainly learned a lot from The Deadman, and he even got permission to wear a hat.