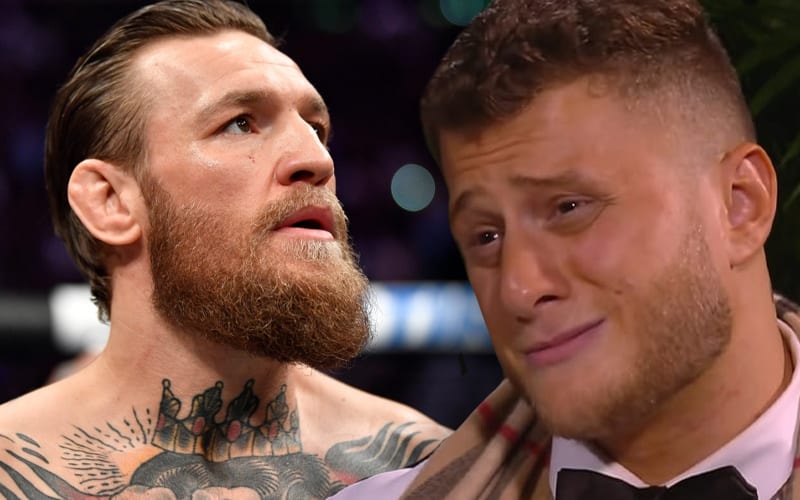 MJF has been compared to many classic pro wrestling heels throughout his young career. Some might even put his gift of gab up there with Conor McGregor. The two do know how to hype an event, but MJF thinks that’s a “cute” comparison.

While speaking to What The Heck, MJF said “it’s laughable” to compare himself to Conor McGregor. He said that McGregor is “great in MMA,” but if they ventured to AEW then “they’d be in a lot of trouble.”

The Salt Of The Earth continued to say that he enjoys Notorious’ work in the Octagon, but he still couldn’t spar with him. If that happened, then someone like McGregor, or even Colby Covington, would be in for a verbal beatdown.

“I think it’s cute in comparison to me. It’s laughable, but I think they’re great in the world of MMA. If either of those two guys came into the world of AEW, they would be in a lot of trouble. They’d get absolutely verbally bent over, if you know what I mean. For what they do, I really enjoy what Conor McGregor did in the UFC. Colby Covington is somebody who understands how to get a reaction out of a crowd, whether positive or negative. And yeah, I enjoy what both of them did. But could they spar with me? No, absolutely not. That would not be good. I don’t think that would be good for anybody, honestly. It would be uncomfortable.”

MJF also brought Colby Covington into the conversation, but he still doesn’t believe he would stand much of a chance against him.

We’ll likely never know how MJF would really do against Conor McGregor of Colby Covington unless Tony Khan is willing to put up a ton of money. It might be an uncomfortable situation to watch for many reasons. MJF doesn’t have any lack of confidence, as usual.