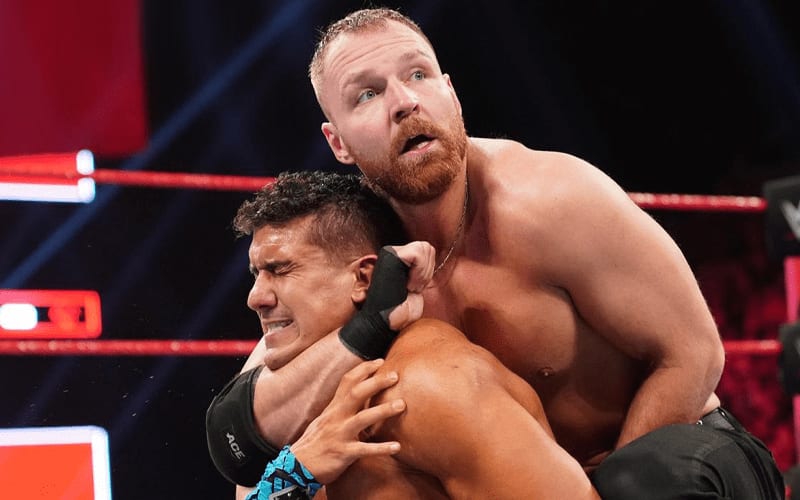 Jon Moxley and EC3 have an interesting story. EC3 was given the task to have WWE fans boo Dean Ambrose when they knew he was leaving WWE. That was very hard to do, and it proved impossible. EC3 is a good worker, but he couldn’t get fans to hate the Lunatic Fringe as he was on his way out.

EC3 was released from WWE and he’s controlling his own narrative now. He would also like another crack at Jon Moxley.

While speaking to Fightful, EC3 admitted how much Moxley helped him out when he brought up his name in that shoot interview with Chris Jericho. People needed to understand why Vince McMahon soured on EC3. Once they heard that, it made sense.

EC3 continued to say that he would like to have another match with Moxley, but he wants a brutal encounter. Real glass and barbed wire could be involved and it seems like EC3 isn’t afraid of getting cut up in the process.

“Seeing that, the mention of that means there’s a wide open facility to tell an amazing story with him down the road that is real, resonates, emotional, has moments. In theory an EC3—deranged, shaved head, psycho boy—who’s lost it all can very well blame Jon for everything he experienced because of his deciding to leave the company, of his deciding to talk about me outside of it. If that means we wind up rolling around in glass and barbed wire and throwing each other off things and just beating the living s**t out of each other for the entire world to see, hopefully in a packed arena some day, that’s really cool.”

We’ll have to see if Jon Moxley and EC3 end up in the same company once again. This could open the door for a very interesting storyline.

AEW hasn’t signed EC3 to a deal yet, but his proclivity to ink shorter contracts might be enticing enough for Tony Khan to consider bringing EC3 in just so he can roll around on some glass with Jon Moxley.