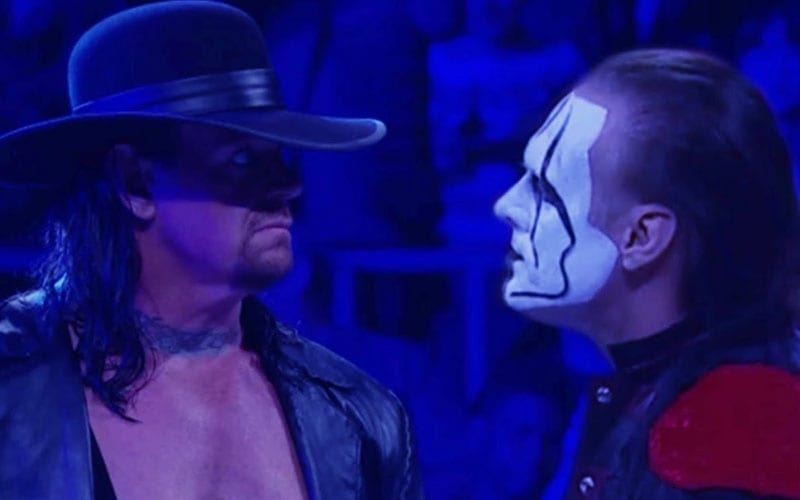 For over twenty years, pro wrestling fans have always wanted The Undertaker and Sting to square off against each other inside the ring. When Sting made his debut in WWE back in 2014, fans were hopeful that they would finally get to see the dream match happen. However, that was not the case.

There are various speculations as to why the match did not take place. Jim Cornette on his Drive Thru podcast shared his thoughts regarding the matter. He explained that it would have been a very difficult match to book as WWE simply could not satisfy every fan.

If they made Sting lose, then ex-WCW fans would have reacted negatively. On the other hand, if Undertaker lost, then WWE fans also would have been upset at the outcome. Cornette stated that the only feasible way the two could have shared the ring together was if they became tag team partners.

“People would’ve thought they wanted to see it but then it would’ve been a bummer at the end because somebody would’ve had to lose or it would be a bulls*** finish and everybody would complain about that.

“If they could’ve figured out some way they could’ve been tag team partners against some team that had some heat, and people wanted to see that team get the s*** kicked out of them, that would have been great. But Sting vs. Undertaker, people just got fixated on it because the match had never happened… for good f***ing reason.”

Sting had also pitched an idea for a cinematic match against the Undertaker, but WWE rejected it.

With Sting signing a multi-year contract in AEW and The Undertaker effectively retiring at Survivor Series, it is highly unlikely the two will ever cross paths.

Do you agree with what Cornette said? Let us know in the comments below!