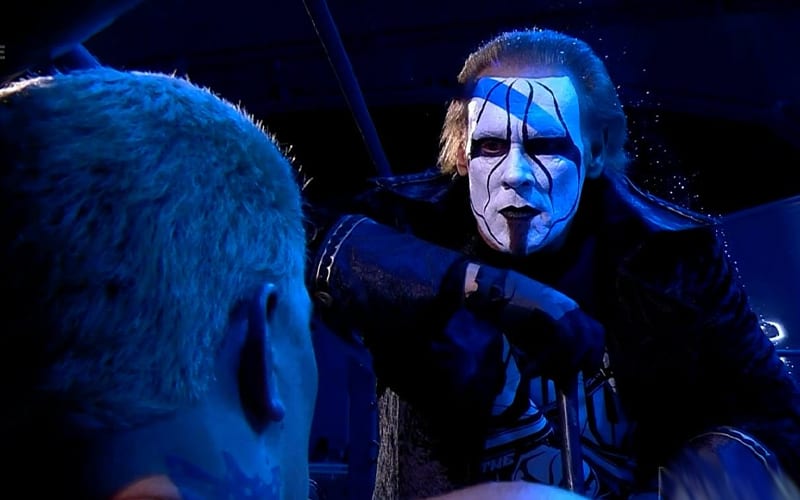 Sting appeared on AEW Dynamite, and it was a big surprise for the entire pro wrestling world. The big signing for Sting was met with a lot of questions, and fans will know what he is up to this week when the Stinger speaks on Dynamite.

During What Happened When, Tony Schiavone revealed that Tony Khan told him ahead of time that they were talking to Sting. He didn’t know what Sting would be doing, but it really felt good to say his name on TNT once again.

When Schiavone got to Daily’s Place that day, he said that the only reference Tony Khan made during the production meeting to Sting’s debut is that they had something planned that would be “really cool.”

“When I got there that day, we had the meeting the night before and when Tony Khan goes over the meeting, he will just say for instance, he said ‘Cody and Darby will have the match against Team Taz. The match is scheduled for whatever, five minutes plus the commercial break and then five minutes on the back end. At the bottom, it said five minutes for a post-match angle and it will be really cool.’ That’s all he said during the meeting on Tuesday. On Wednesday, I got there and I was told Sting is coming tonight. I’m thinking this is some big sh*t.”

“Sting doesn’t come until late and me and JR and Tony Khan and Excalibur go back in the trailer where Sting and his wife were in and we talk to them. He was really in a good mood and excited. Tony is really excited to talk to him. We talked about how we were going to do this.”

Sting’s AEW debut was a need to know situation. This wasn’t the kind of thing that they wanted everyone to know because a secret is best kept between the fewest people possible.

The Young Bucks said that Sting caused the AEW roster to “mark out” because they didn’t know he was there. Tony Schiavone had a very good idea that Sting would be there, but the moment still seemed very organic on camera.