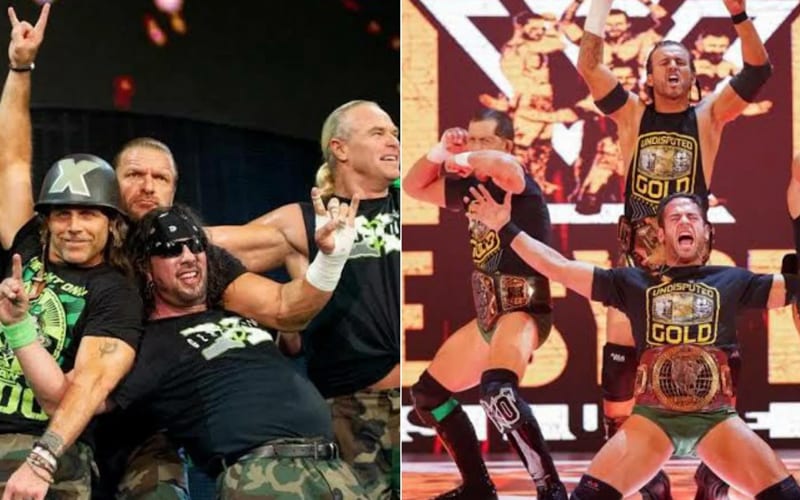 DX’s run in WWE history brought them to the Hall of Fame. Is the Undisputed Era headed in the same direction?

While speaking to Fox Sports, Triple H was asked about the Undisputed Era. That tenured stable in NXT gets along in real life, and they also have a lot of fun in the ring. Triple H compared the UE to another faction that he knows very well: DX.

The Game said that The Undisputed Era shows the same magic that D-Generation X did all those years ago.

“That [authenticity] to me is the magic of it. When that magic is there, it’s next level. They have that magic. It’s real to them. There’s no show. I think that’s what worked with DX. It wasn’t a show. We were just us. We all got along in that manner. When it’s magic like that, it really works.”

Undisputed Era’s chemistry is undeniable. They can take any segment and bring their own unique personalities to the equation. All they need is to point the camera at Adam Cole, Kyle O’Reilly, Bobby Fish, and Roderick Strong and watch them go.

“That unit is that unit. They get along. We shoot stuff with them at a restaurant, where they’re doing toasts and all this stuff and it’s kind of like, well, you just put cameras there and let them go do their thing because they just go be them.”

“In a way, I always feel like that stuff resonates the most when you can see a bunch of people that are on some level legitimately have that connection to where as a viewer watching, you think to yourself, ‘Man. I’d just like want to hang out with those dudes. I’d like to be at that dinner and just have dinner with them and hang out with them because it looks like it’s so much fun.'”

The Undisputed Era have a big match at WarGames, an event that they have made their own in recent years. They will battle Pat McAfee and his Kings Of NXT.

It will be interesting to see if an eventual WWE main roster call-up changes the dynamics for the Undisputed Era, but they are certainly a faction that fans would hate to see disbanded.