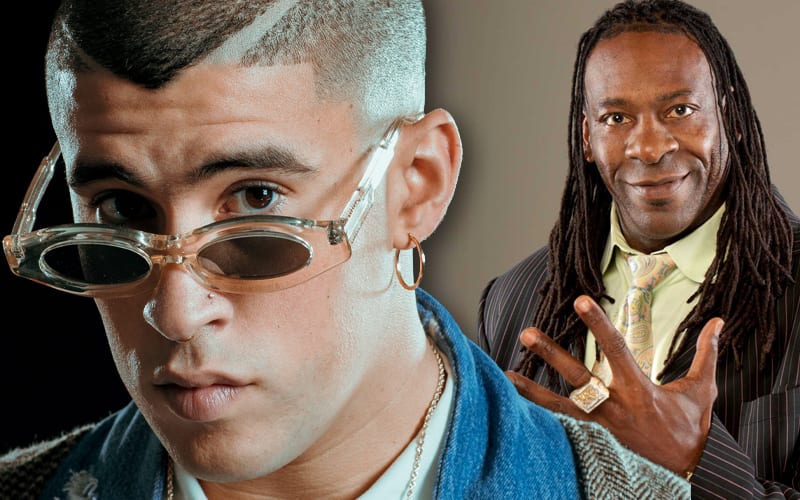 Bad Bunny recently dropped a new song called “Booker T” on his  “El Último Tour Del Mundo” album. Booker T knew this song was coming, and he is very honored that it made so much noise.

During his Hall Of Fame radio show, Booker T discussed the Bad Bunny tribute track. He is staying relevant in a big way as one of the most popular rappers on the planet dropped a song with his name in the title. He had to give Bad Bunny props for how it all turned out.

“It ain’t about being the guy on the top of the mountain,” Booker said. “It’s about staying relevant. In 2020, Booker T is still relevant heading into 2021. We’re getting ready to do it and do it big. I got to give props, man, I got to give props to Bad Bunny. For all these years, I’ve been waiting on a song about Booker T and now, Bad Bunny, the hottest Latin sensation in the world today, put me on, man. He put me on blast big time and I appreciate it. So staying relevant, Bad Bunny, you did that for me man, and I just want to say, I appreciate it.”

Booker T knew this song was coming because Bad Bunny contacted him first to ask his blessing. Bad Bunny called the two-time WWE Hall of Famer because he was a fan. Now Booker T’s name is immortalized on the “El Último Tour Del Mundo” album along with pro wrestling history.

“He reached out actually, he was a fan. One of those kids, you know, growing up, getting in trouble, doing the spin-a-rooni, scissor kicking somebody. That’s what was so cool about it – it was organic. It wasn’t something that him and I, you know, had to collaborate on. It was just that he was a fan of mine, and I’m a fan of the new generation and what the young guys are doing out there right now.”

WWE likes to feature their famous fans in whatever way they can, especially musical artists. Once WWE is able to have fans back at events they very well could invite Bad Bunny back for some kind of a special musical performance. Odds are he could help create more than one pro-wrestling themed track; because he is a pretty big fan already.