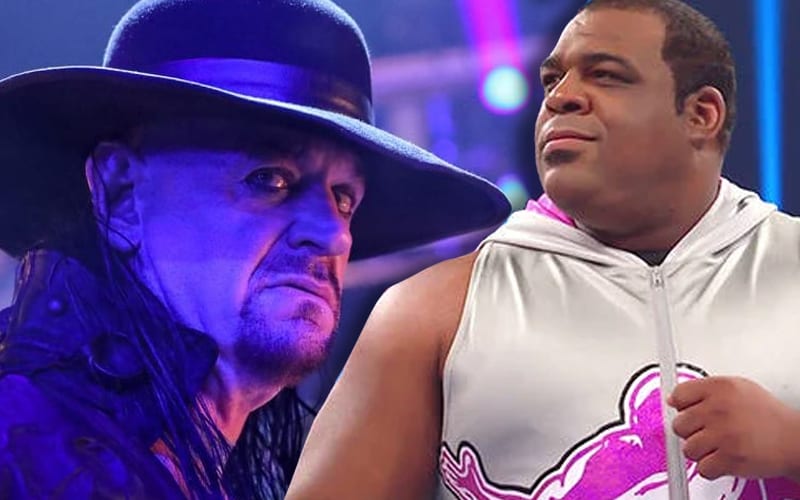 Keith Lee is still making a name for himself on the WWE main roster, but he has some big support backstage. The Undertaker is one man who has his back in a big way.

The Undertaker traveled to the WWE Performance Center on a couple occasions where he spoke with some big men in NXT. Keith Lee was there at the time, and that started a friendship with The Deadman.

While speaking to Sports Illustrated, Keith Lee explained his relationship with The Undertaker and how it came about. The Deadman is a huge inspiration for Lee, like he is for so many others, and Keith Lee values any guidance that The Undertaker can provide.

He’s a staple that has meant a ton to the business as a whole. It doesn’t matter what company you work for: That guy made an impact in some way, form or fashion. He’s someone that I respect, and I’ve definitely absorbed a lot of knowledge from him. I have spent a good amount of time with him, and the knowledge he imparted to me goes all the way back to 2008, way back when I was an extra [in WWE].

That was when I came across and introduced myself. All the way back then, from the point where he told me to make the things I do mean something, he’s had a huge impact on my career. He’s been a huge inspiration in terms of thought process and how my mind works for this business, but also a motivation to be different. This is someone I’ve looked up to, someone I’ve studied time and time again. Hearing him express his appreciation for how I present myself and how I wrestle, it means a lot.

It reminds me of when I sat down with Mark Henry and Booker T. When I hear the things they have to say about me, it’s surreal. It’s hard to digest sometimes, but it makes me more thankful for guys like William Regal and Dusty Rhodes. If it weren’t for them, I wouldn’t still be doing this. Thanks to them, their guidance and lighting a fire under my butt, I kept going. Now I’ve found myself in a position where the guys I look up to are honoring me. That’s like magic to me, and I’m super grateful.

The Undertaker has interest in becoming a trainer at the WWE Performance Center, but they haven’t been able to make things work in terms of his location. Taker lives in Texas and the PC is in Florida. Neither of those things seem to be changing any time soon.

Keith Lee will continue, and he will likely impress a ton of people along the way. He will also have The Undertaker watching from home ready to provide any extra advice.