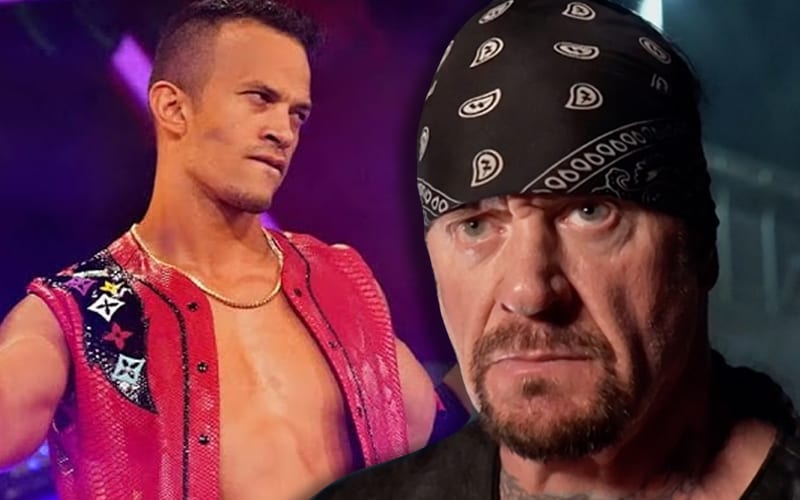 The Undertaker has a lot of friends, and WWE even flew a few of them in for his Final Farewell. He is also friendly with an AEW star that some might not realize.

While chatting with Chris Van Vliet, Ricky Starks revealed an unlikely friend that he made in recent memory. It turns out that Starks and The Undertaker got to know each other outside of the pro wrestling business.

“So back in Austin? There’s a gym called Onnit. I only started going to Onnit because I thought I would have a [WWE] tryout back in 2016. So I was training way before I fully had my tryout.”

“And so I was there, barely making it by because the fee is $194 a month, and I was making minimum wage” Ricky Starks continued. “So I would go at the same time that ‘Taker was there. Undertaker was preparing for his match against Shane [McMahon] in Dallas for WrestleMania 32. He was there constantly.”

Starks said that The Undertaker was working on a documentary. That would turn out to be the Last Ride docuseries that just completed airing on the WWE Network. That series chronicled the Deadman’s final years in the pro wrestling business as an active competitor while Starks was just starting his journey

“He was filming a documentary, but he was filming a documentary just for his family, because he figured that would be the last one. I’d befriended the the guy who was doing the documentary, his name is Brandon. He’s a really nice dude, I told him like ‘Taker one of my favorites, and I would talk to ‘Taker. I went up to him say thank you for everything, and so since I was there all the time? Undertaker would come and make small talk with me.”

Ricky Starks actually received a call from WWE after his AEW debut. He ended up choosing to sign with All Elite Wrestling, and that distanced him from the Undertaker when it came to a professional level. It’s interesting to know that the two formed this little friendship while The Undertaker was around.