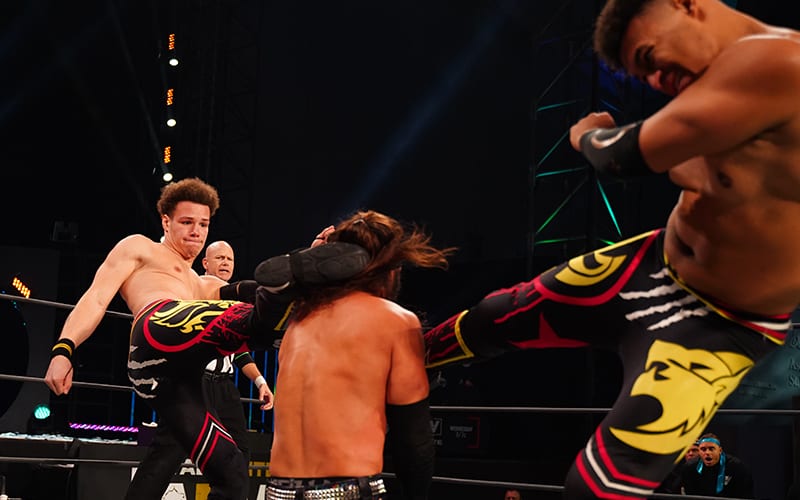 AEW signed Top Flight to full-time deals, and that changed their lives forever. Prior to signing with AEW, the two were struggling on the indies during the pandemic. They also had day jobs, but those days are now behind them.

While speaking to Wrestling Observer Radio, Matt Jackson revealed a conversation he had with Top Flight. The brothers had day jobs, and they didn’t really understand what being under contract meant. Jackson had the privilege of telling Darius and Dante that they could quit their day jobs because they’re set now.

“Darius tells us, the older brother, I think it was him, because we were like, ‘Look, we’re offering you a deal’ and I don’t think they understood what exactly we were saying. ‘This means that you’re going to make a lot of money and you’re going to have a guaranteed salary and you’re going to have a check every two weeks so,’ and Darius goes, ‘I work at a grocery store.’ I go, ‘Not anymore you don’t buddy,’ and Dante said, the younger brother, he’s 19. He’s working at a gym and the gym, it’s been really tough obviously because of [the] COVID thing and we told him the same. We told him, ‘Well tell them that you no longer need to work there man.’ I said, ‘You guys are set now’ and all it took was them having the courage to just reach out and send me a direct message on Instagram.”

Top Flight is only getting started, and they have a long list of AEW tag teams to face along the way. Now that they are officially under AEW contract, the two can focus only on becoming the best pro wrestlers possible. There is no shortage of talent around AEW to help them out along the way.