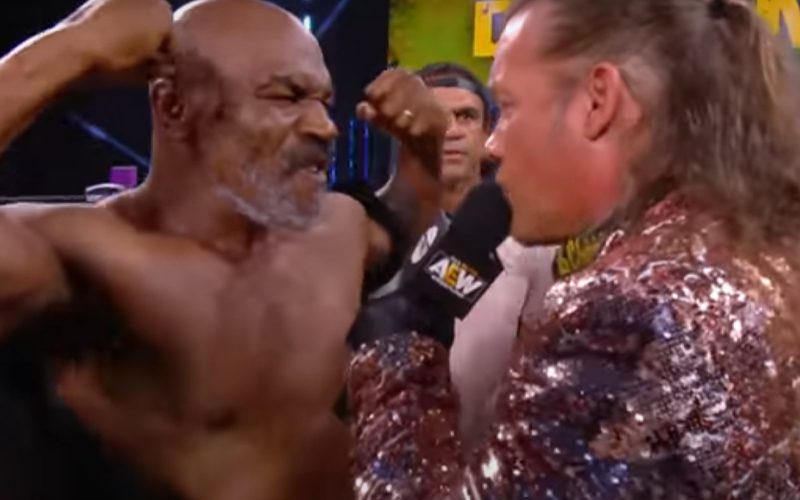 Mike Tyson showed up on AEW television, and he had a good time. He also sparked a feud with Chris Jericho. That angle is now in limbo as Tyson prepares for his next boxing fight against Roy Jones Jr, an exhibition fight where they will not count points or declare a winner.

During Talk Is Jericho, Le Champion discussed Tyson briefly. He’s uncertain if something with Tyson in AEW will actually happen at this point. The original idea he pushed for included a boxing match. Chris Jericho has taken punches before, and he was prepared to take one from Iron Mike Tyson.

“Earlier this year, when we had the little confrontation with Tyson, which may or may still happen. Who knows really, but they said, ‘Mike really wants to do something. What would you be up to?’ I said, ‘whatever. Let’s do a match.’ You want to do a boxing match? I’ll box Mike Tyson. How bad can I get beat up by Mike Tyson that’s worse than taking stiff shots from all these guys that I’ve been beaten up by over the years?”

“You can hit me and I’m fine. I’ll be fine, and I remember when Big Show had that with Floyd Mayweather. He told me Mayweather hit him and Mayweather broke his nose. And Show was like, ‘I’ve had my nose broken by less.'”

Tony Khan said that he is talking to people that nobody knows about yet. AEW has a lot of surprises in store for fans in 2020 and beyond. We’ll have to see if a match with Mike Tyson is a part of those plans. They certainly created enough interest that we’re still talking about the possibilities to this day.

The thought of Chris Jericho taking a punch from Mike Tyson might draw some pay-per-view buys, but they haven’t been able to make it happen just yet.