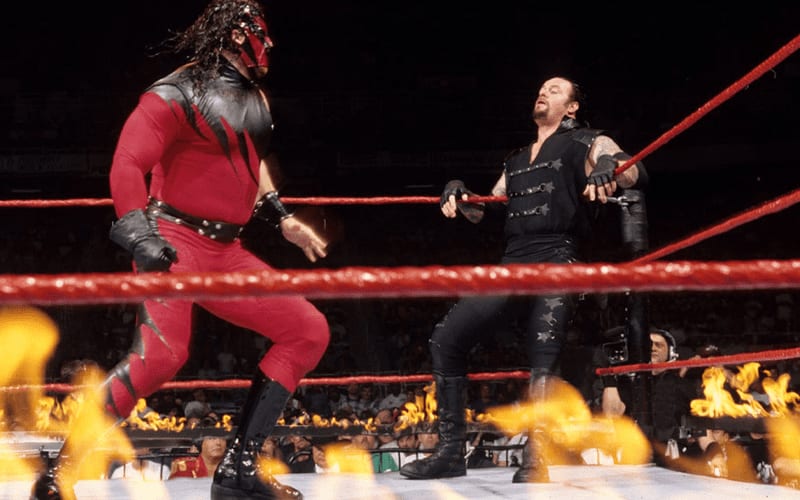 The Undertaker is set to wrap up his legendary career at Survivor Series on November 22nd. He is not slated to wrestle a match as of this writing, but he certainly put in his ring time, and in some novel matches.

The Undertaker found himself in Hell in a Cell matches, Boiler Room Brawls, Buried Alive contest, and plenty of casket match encounters. Those gimmick matches became synonyms with working a long program against The Deadman.

While speaking to WWE The Bump, The Undertaker discussed all of the crazy gimmick matches he went through. There was a time when he thought that they might have been hinting that he should go, but he was honored to have a character that fit so many unique situation.

“Funny enough, no I didn’t [have to be talked into anything] I was just honored to be in all these different matches which were inspired by my character. A lot of the matches with Mick Foley I thought that they were just trying to get rid of me. I thought that was their way of telling me I’ve got to go because some of those matches with Mick were insane like Hell in a Cell, Boiler Room Brawl, Buried Alive even, it presented several challenges too. It’s humbling to think of all the matches associated with Undertaker.”

The Inferno Match was a rather unique setup. The only way to win that contest was to set your opponent on fire. This match was as dangerous as it sounds because there is no real way to predict what fire will do in the moment.

The Undertaker remembers sitting next to his kayfabe brother Kane when they were pitched this idea. They went through with it, but there was a moment where neither of them knew what to think.

“I remember sitting there with Kane when the Inferno Match was presented. We were kinda looking at each other like… [weird looks]. It happened to actually be — both Kane and I agree — the Inferno Match was one of our better technical matches. It was insane, obviously it was hot, but it was insane because when those pyro blasts go off it just sucks the wind out of you. Like we were gassed already, but we didn’t know when those pyro blasts were gonna go off like we didn’t want to be too close to the ropes. Like, it was a mental test as far as a physical test. Just making sure that you weren’t in a fire zone.”

WWE doesn’t use casket or buried alive matches much anymore, but the possibility is always there. It would be impossible to hold one of those contests and not think about The Undertaker.

If The Undertaker is not involved in those encounters, that’s fine by him. He did his work and can now watch others entertain while he stays out of the action.