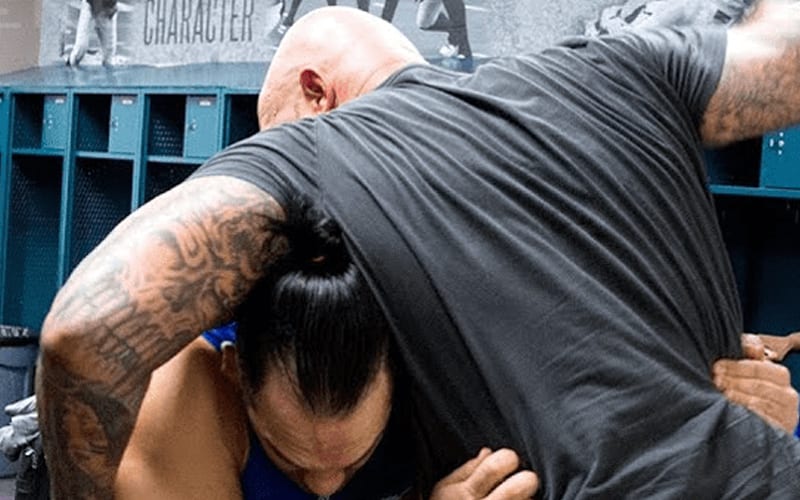 You never know what can happen in WWE, and that applies to the locker room as well. Los Guerreros, Eddie and Chavo Guerrero, were not a team to mess with outside of the ring. The also knew how to fight, but they were not the only two legit tough guys in the WWE locker room. The World’s Greatest Tag Team had that name for a reason.

During a recent episode of Something To Wrestle With, Bruce Prichard told a story about how Eddie and Chavo Guerrero almost got in a legit confrontation with Shelton Benjamin and Charlie Haas. Thankfully, cooler heads prevailed, but it was a very intense situation for a moment.

This apparently took place in San Diego, but the reason for their spat wasn’t revealed. The two teams were feuding on television, so something in the ring could have spilled into the locker room for real.

“During this time, there was an incident in San Diego with The Guerreros and Haas and Benjamin. I went back and I sat there, ‘Ah sh*t’. They’re all pissed off, and I think that Charlie and Shelton were in the locker room, Chavo and Eddie went in, and I think it was Chavo going in and Eddie having his back. Long and short of it, they came in to fight and everyone knew it. Someone had told me and I headed off.”

“Chavo and Eddie at the pass, and there was a glass door into the locker room there. They kind of just end around me and got in; it wasn’t really a fight. I think everybody got in between them and cooler heads prevailed.“

“You talk about a scary fight! Four tough guys – legit four shooters that can definitely go. I’m extremely grateful that cooler heads prevailed and I didn’t get my ass kicked in the middle of them kicking each other’s ass.”

Pro wrestling is a very intense form of entertainment for everyone involved. Sometimes the wrestlers’ passion in the ring ends up causing legit problems with their coworkers. There are times when speaking about issues won’t do the trick, so a fight can break out. It’s a good thing that things didn’t get too far, but Bruce Prichard certainly got a good story about it for his podcast.

If you’d like to know how Bruce Prichard was able to keep his podcast despite WWE’s third party ban, you can click here for that information.