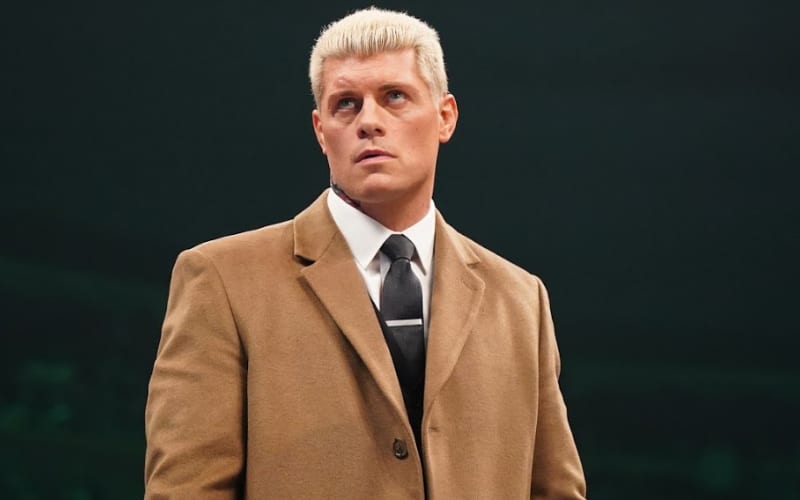 AEW touts a family atmosphere, but one former employee did not have the best experience. Louie Benson worked as a video editor for AEW, and he is no longer there. He unloaded a multi-screenshot text thread of tweets detailing an environment that wasn’t as welcoming.

Benson started out by explaining how he made his way to AEW by way of Comeback Studios. Then he was told shortly after he was hired that Cody Rhodes “didn’t like me and thought I was a ‘stalker fan.'” He said that didn’t make sense to him because the interaction he had with Cody was pleasant thus far.

“Cody apparently requested that I not be present when he was in our building which led to me either being made to leave or stuck hidden in a room when he came around, having to ask if I could come out to use the restroom.”

He was told “If Cody asks, we’ll fire you.” So, he stayed out of sight. He was also told not to talk to any talent, including those he was friendly with beforehand.

Benson was allegedly forced to take down a Facebook post explaining that he took a job working with AEW. He was told Cody sent his boss a photo of the post and a “thumbs down” emoji.

It was also said that “after being told for months that Cody didn’t want to even be in the same room as me, he showed up randomly on a weekend while I was working and I literally came face to face with him. He greeted me like nothing was wrong, and gave me an aggressive high-five after complementing my All In shirt.”

Benson detailed issues getting credit for his work. He did the job of a producer, but was considered an assistant. It is also alleged that he was forced to delete his entire social media, and he says they made him do it on the spot so they could watch.

Cody later acknowledged everything that Louie Benson had been through and said that he liked. Benson also had nothing but great things to say about QT Marshall.

COVID-19 changed Benson’s job dramatically. He was not working with talent on promos anymore or filming digital video. That work dried up, and he was no longer working on AEW material.

Benson later said that he’s not sure Cody Rhodes knew how he was treated. He knows what he was told and the efforts he made to stay out of Cody’s way.

He asked for three days to move, and he alleges that was an issue as well, one he was chastised over. He came back and he wasn’t told that someone he shared a working space of had symptoms of COVID-19. He quarantined, and then he discovered his girlfriend was possibly exposed to COVID-19. He requested additional time off, and this was an issue.

He alleges that they told him that he needed to work 60 hours a week to keep his job.

You can read his detailed experience in the tweets below.

News Tip
wpDiscuz
110
0
Would love your thoughts, please comment.x
()
x
| Reply
You are going to send email to
Move Comment