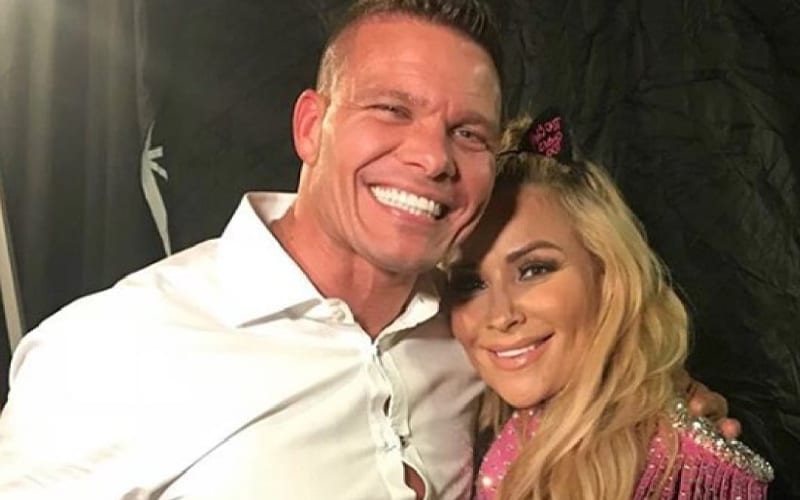 A lot goes into making a match happen on WWE television. Some fans don’t realize the important role that a WWE producer plays. Tyson Kidd is a WWE producer and he has been for years while helping to work out matches before they make it on television.

D-Von Dudley’s Table Talk recently had Natalya on as a guest. She was asked about her husband Tyson Kidd and she had good news to report. Not only is his injured neck doing much better, but him becoming a producer for WWE has helped Natalya appreciate the role in a new way.

“Good! It’s really good! I probably worry about TJ’s neck more than he does just because I’m very protective of him, and TJ is good. I mean, he’s in a really, really good place. He absolutely loves being a producer in WWE.”

“I’ve had a different appreciation for the producers because TJ is a producer. He’s been a producer for a few years, and it is probably one of the hardest jobs, if not the hardest job, in the company because there’s just so many things that I see that TJ has to do and balance. It’s just a balancing act all day. So while we as the wrestlers, as the talent, we may be only focusing on one thing – our match – the producers have so many other thing that they’re focusing on, and they’re also producing multiple matches. They’re dealing with multiple people.”

“They’re making sure, ‘Okay, we got to make sure this prop is there and this table is set up’, and, ‘everybody knows this.’ I mean, again, you think about D-Von, and Shawn Michaels, and Triple H. It’s hard though because the producers literally got to see everything differently than they’ve ever seen it before. So it’s a balancing act, and I give the producers so much credit because if we make a mistake in the ring, sometimes we don’t get in trouble but the producers will get, ‘Hey, why did that happen?’ Again, this is kind of inside talk, but it is challenging and I know TJ loves it.”

It’s always great to love your job, and that is the case for TJ Wilson and his wife Natalya. WWE provided them with a great opportunity that they continue to capture to this day. It would be nice if Tyson Kidd could wrestle again, but knowing he’s healthy and happy with his current contributions is also amazing to hear.