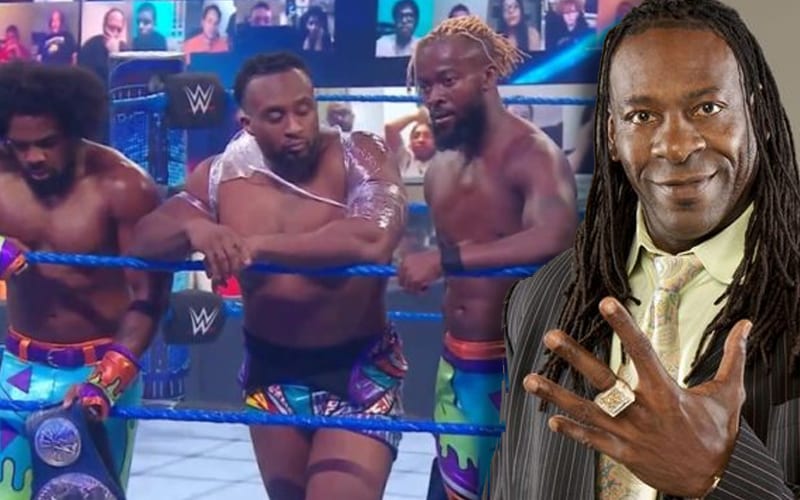 WWE split up the New Day during the 2020 Draft. Big E is getting a push on his own as a singles Superstar. Booker T is a fan of this decision.

So many fans were heartbroken when the New Day split. Now Kofi Kingston and Xavier Woods don’t have Big E to do their intro. This will also give them all a chance to evolve as Superstars.

During his Hall Of Fame radio show, Booker T explained why he is a fan of WWE splitting up the New Day. Now Big E can create something of his own. Booker also expressed a desire to work with him in some way.

“I’m glad personally. This is the only way Big E can really run on his own. He could really put himself out there without having that umbrella of the New Day. You have to let it go and go out there and be Big E and create his own brand in order to fuel what he’s trying to do right now and that’s take it to the next level. I’m not saying he has to change anything. Big E is going to have to create his own brand. If that is happy go lucky Big E, that’s fine with me, but he’s going to have to do his own thing.”

“Hopefully, Big E will step up. I wish I could work with Big E for a minute. I wish I could get him in and let him sit under the learning tree for a minute like I did with Bobby Lashley back in the day and say this is what we need to do. Big E is a guy that I feel I could coach. If I was to manage someone, it would be a guy like Big E because I really feel Big E could run through the whole territory if the stars were aligned right for him.”

“I’m not saying I want to be a manager, but I feel if there is anyone I could manage and get some feelings out of the fans watching this would be a guy like Big E. Big E could really be the guy if he had the right expert tutelage.”

The New Day might be split up, but it’s not goodbye forever. They gave no indications of hostility so WWE could always get them back together if they want to revive the trio. In the meantime, Big E is entering an exciting chapter of his career as Kofi Kingston and Xavier Woods move to the red brand as tag team champions.