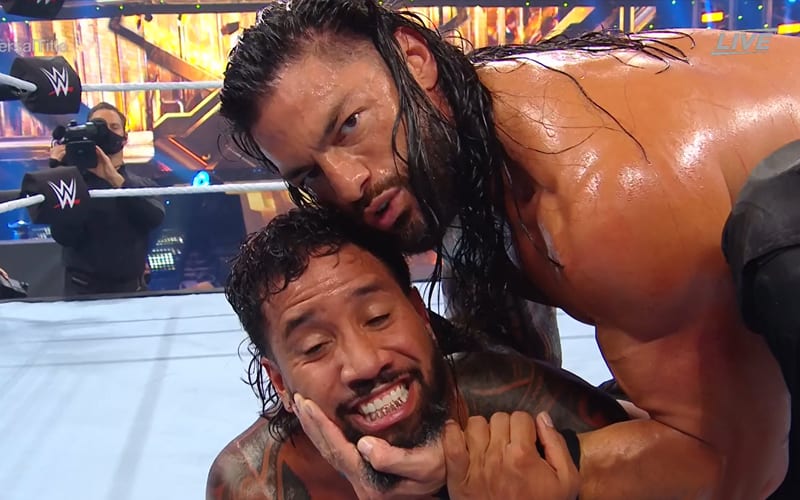 Roman Reigns’ time as Universal Champion is just getting started if you ask him. He will face Braun Strowman on Friday Night SmackDown this week, and The Tribal Chief has another match set against Jey Uso at Hell In A Cell on October 25th. That storyline should have ended at Clash Of Champions Gold Rush, but the organic reception the angle received kept it going.

While speaking to CBS Sports, Roman Reigns discussed the feud he is currently waging with his cousin Jey. He said that the real-life aspects of that rivalry help them connect with their audience. This is why they are continuing.

“I’ve taken these real-life qualities and experiences and put them in a storyline. That has been able to connect with our audience in a really cool way because they’ve seen me grow and they’ve seen my path and they’ve seen me operate on this top tier of WWE for a long time. For me to actually emote and explain the dimensions of it, I think they dig that and the feeling that the fourth wall is down from time to time. To me, this is Roman. He’s not Joe. I’m able to connect to everything I’m doing now way stronger than anything I’ve done before.”

Roman Reigns didn’t appear too thrilled that Braun Strowman is getting another Universal Title opportunity. He was quite open about how he believes Strowman doesn’t deserve that title shot. You can click here for that information.

Jey Uso will likely go back to his tag team once Jimmy Uso returns from injury. In the meantime, he is getting an amazing opportunity to shine on his own.