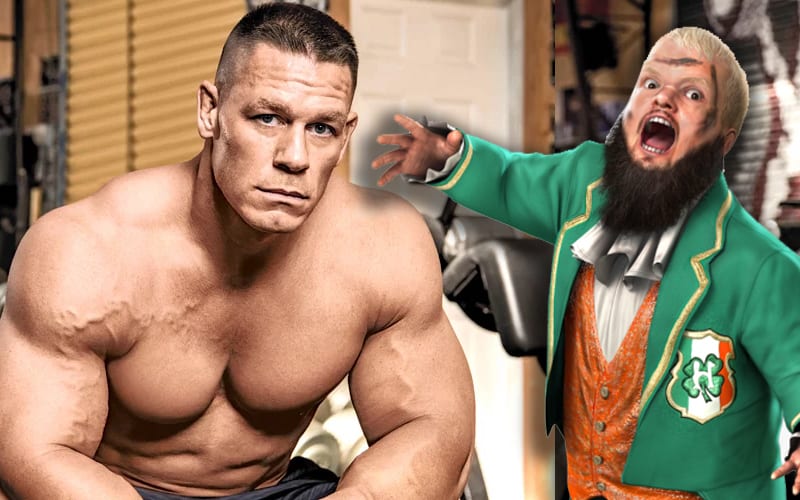 John Cena isn’t around WWE much anymore, but there was a time when he was a locker room leader in every respect. He even reached out and helped Hornswoggle get into shape.

While Swoggle spoke to New Day: Feel The Power, he revealed that John Cena helped him out when WWE told him to lose weight. Swoggle admits that he “was really fat,” but Cena helped out. The 16x World Champion had his trainer write up a workout regiment for Swoggle which is followed and still uses to this day.

“This was when I was told to lose weight and I was really fat, and I was. [John] Cena was putting me in a workout. He had his trainer write me up a weekly workout, which I still use. I’m doing the Cena workouts, which were crazy workouts too. But then at TV days, Regal would put me through another workout, which is essentially him just making me squat, and do pushups, and weird things.”

“Very odd workouts with calisthenics. I don’t do that stuff! I don’t know what that is. I remember at one point, we would always find a random college we thought no one would go into, but everyone went into it and then I will just be doing squats, doing push-ups shirtless, which is really weird because– I don’t know. I would be shirtless and then Kofi would come in or this other guy would come in, and if Regal wasn’t there, Daniel Bryan had to run the workouts for him. It was just a very weird thing. Looking back, I don’t know why I did it. Why wouldn’t I just say no? I don’t think doing hundreds of squats with Regal was the reason I lost the weight.”

Hornswoggle was released from WWE in 2016, one week before he would have celebrated a decade with the company. Swoggle is still taking indie bookings and doing his own thing. John Cena has made no secret about his activities outside of WWE either.

You can never say never in pro wrestling so there might come a time when the two will meet up once again so Swoggle can let Cena know how much those workout tips helped him.