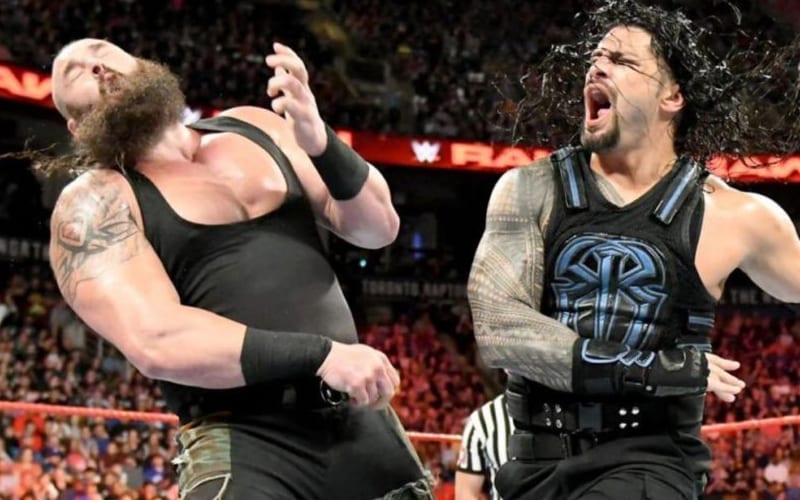 Roman Reigns is back in WWE, and he regained his top spot in the locker room, and as champion. Former Universal Champion Braun Strowman has an opportunity to win his title once again, but he’ll have to topple a white hot Roman Reigns to make it happen.

While he appeared on First Take, Roman Reigns was asked which pro wrestler he looked up to as a kid. They specifically asked for one he wasn’t related to. He picked Bret “Hitman” Hart as a man he looked up to because Hart was a journeyman who could consistently deliver long matches.

Roman Reigns said that WWE meshes all of those characteristics that The Hitman brought to the table with their current roster of Superstars. He also intends on bringing a long encounter to Braun Strowman on Friday Night SmackDown.

“Bret Hart, Bret ‘the Hitman’ Hart was kinda my guy… A lot different than yours with the Ultimate Warrior. There’s just something I respected. He was like a journeyman, like a blue-collar sports-entertainer, you know that pro-wrestler, go in there and wrestle for 30-minutes every single night. He just put a different dynamic on what the top looks like, and I like to think that we have a little of all that nowadays.”

“We’ve kinda had to mesh having the character, having the swagger and also being able to go in there and put in twenty or thirty minutes of work if we have to and that’s what I’m prepared to do this Friday against Braun Strowman.”

This appearance was a means for Roman Reigns to talk some football, and plug his Universal Title match this Friday on SmackDown. We’ll have to see if The Tribal Chief can pull a twenty minute epic encounter out of the Monster Among Men before Braun Strowman returns to RAW.