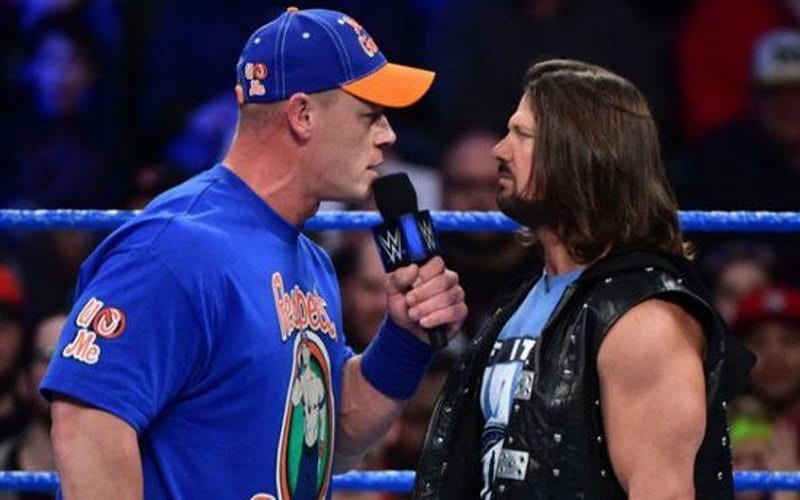 AJ Styles’ entry to WWE saw him in one high profile feud after another. He was paired against John Cena early on during his WWE run, and that rivalry was where AJ Styles and The Good Brothers realized how much fun it is to beat up John Cena, even though WWE wouldn’t let them put it on a t-shirt.

While speaking on his Twitch stream, AJ Styles walked fans through what it was like to set up that feud with John Cena. Styles had no issue coming up with something to say about Cena: he buries people. The same couldn’t be said about John Cena as he researched AJ Styles and couldn’t find much to rip on.

“I remember the first time we had the opportunity to talk about what we wanted to do and what kind of story we wanted to tell. He was asking what I wanted to say about him, and I was like – this is John Cena, you know, so I’m trying to figure out how to approach this without being a jerk about it – so, I was like, ‘Well, people always seem to think you bury them once you get in the ring with them, and it’s kind of over for them after that.'”

“He was just like, ‘Okay that’s good,’ Styles added. “He went on to say, ‘Well, I tried digging up some stuff on you and I couldn’t really find anything’, so that’s when he ended up coming up with the stuff about, ‘Well, if you don’t like it then you’ll just end up leaving to go somewhere else’. But I thought it was really cool that he takes some real stuff and throws it in the mix of entertainment, and you ended up with a matchup like AJ Styles and John Cena. I enjoyed working with him and can’t wait for the next one.”

AJ Styles was moved over to RAW during the 2020 WWE Draft. Now he is back on the red brand, but John Cena is nowhere in sight. Perhaps those two will meet in the ring again someday so they can revisit the feud that so many fans enjoyed watching.