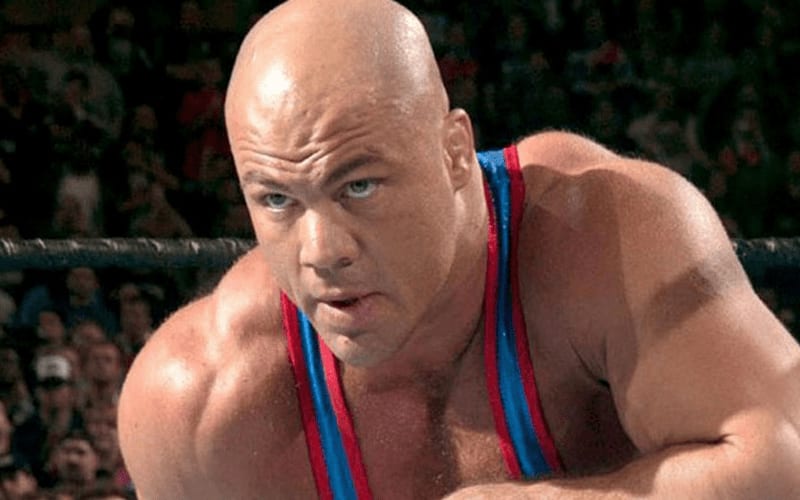 Kurt Angle had options prior to coming to WWE. He could have ended up in the UFC, but the Olympian decided to turn down their deal.

While speaking to PW Insider, Angle revealed the very low 10 fight contract that UFC offered him in 1997. This was prior to Dana White and the UFC was a much different company. $15,000 a fight was still too little for Kurt Angle to take at that stage in his career. This is the reason he kept looking and eventually landed in WWE where they could pay him much more.

Later on, Kurt Angle considered the UFC again. Things just didn’t work out and he continued his path in pro wrestling.

“I got a deal from UFC in ’97 and it was so bad, and the crazy thing is it was the most they ever paid anyone, or offered anyone, it was a 10 fight deal for $150,000 so it was 15 grand a fight. There was no way in hell I was going to do that. But that was back then before Dana White and they were trying to keep it afloat so I went the WWE route but I kept my eyes on UFC and in 2003 I was really considering going over there. I started training at the Pittsburgh Fight Club, I was really debating doing MMA and I broke my neck again so that was the second time, first time was before the Olympics, second time was in 2003.”

“When I healed from that broken neck and I had the surgery and I healed, I lost a lot of strength in my arms, and I lost a lot of size in my arms, I’ll give you a good example, I did that thing in Tough Enough with that kid, those kids, one kid was Puder, and he got my arm, there was nothing I can do. I was in no condition to be in that position.”

“At the time I couldn’t do 3 push ups. I was so weak and I wasn’t sure why they wanted me to do it but I went ahead through with it. And when I did that, I realized – OK, you are where you need to be – in the WWE. You love this business, you don’t have to go off and fight and try and be UFC Champion, because that time passed you [laughs], so I did revisit it in 2006, and Dana White flew me out there and we got a deal structured and he was great, he was an awesome individual, he offered me great money, and I just signed with TNA and I had to make a decision, Dana said “You can’t do both,” because I was going to try and do both, I was going to TNA part time and UFC, and I just signed a deal with Dixie and I didn’t want to let her down, so I stuck with TNA but I’m glad I did it because I wouldn’t have done very well.”

“I was only lying to myself if I thought I was going to be able to compete at that level with the way my neck was and keep my mind, I broke my neck 3 more times after 2003 so it was even that much worse. I mean right now, my arms are 14 inches – they used to be 19. I have atrophy in my hands, my forearms, my arms, my shoulders – it’s gotten really bad, so I’m just trying to stay in shape and I can no longer gain size. I’m going to be an average looking person and I’m OK with that, I just want to look in shape and feel good and that’s it, but there was no chance of me competing in UFC especially after I broke my neck in 2003.”

WWE History would have been very different if Kurt Angle decided to take the UFC up on their 10 fight deal. He could have become a trailblazer in MMA, but instead Kurt Angle became a pro wrestling legend and a Hall Of Famer in both WWE and Impact Wrestling.