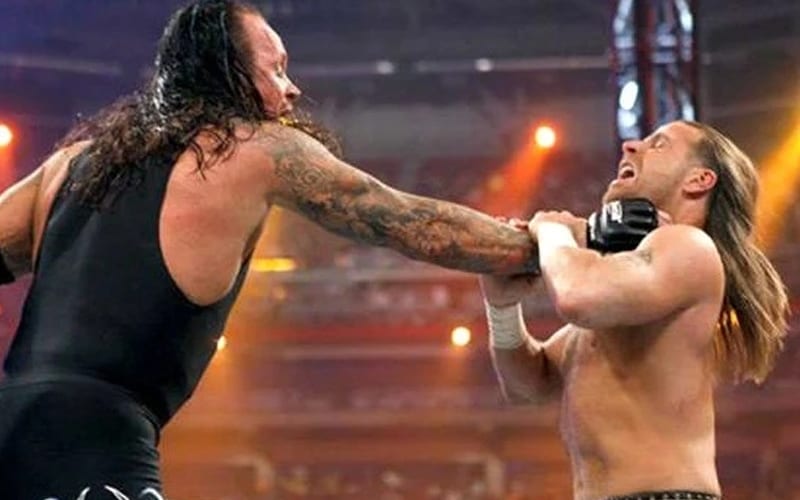 Shawn Michaels lost the WWE Title to Steve Austin at WrestleMania 14. This was a crowning moment for The Rattlesnake, but there was some concern backstage that HBK wasn’t going to do Austin the favor. The Undertaker wanted to make sure Michaels did the right thing.

The Undertaker is all about the pro wrestling business. He was a locker room leader and still commands a tremendous amount of respect. He was ready to shoot fight Michaels if he decided not to do the job for Steve Austin.

During Grilling JR, Jim Ross spoke about that night an revealed just how serious The Undertaker was about making sure Shawn Michaels did the right thing.

Jim Ross explained just how serious of a situation it would have been if Shawn Michaels hadn’t dropped the title. The scenario would have been the same for anyone who refused to do business in this way.

”I got a feeling when Shawn had come back to the curtain and screwed Austin, or anybody just decided to not to business with the championship, he probably got the sh*t beat out of him. When Undertaker wanted to beat the sh*t* out of you, there’s not a whole lot you can do about it, and there’s not a lot of guys that are going to intervene and Shawn didn’t have the backup.”

Luckily for Shawn Michaels, The Undertaker didn’t have to beat him up backstage at WrestleMania 14. We’ll never know if Taker would have really destroyed Michaels, but odds are nobody would be willing to test that theory with The Deadman.