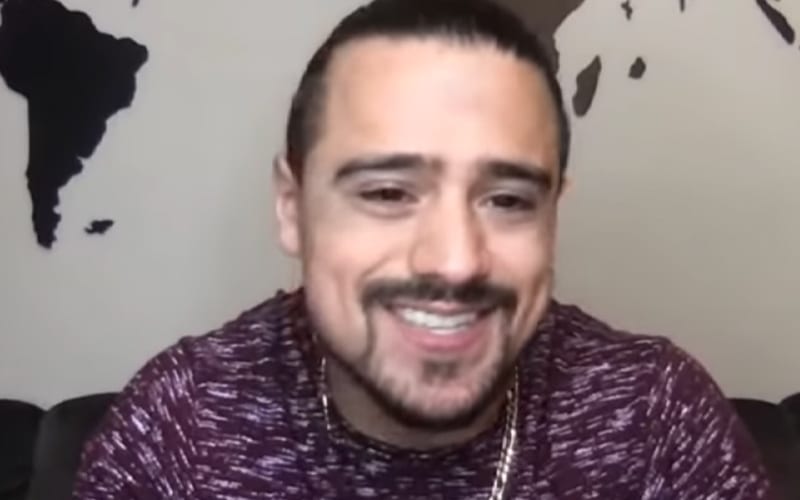 Angel Garza was injured during Clash Of Champions Gold Rush, and that tag team match ended in a hurry with the Street Profits getting the big win. There was some confusion exactly what was wrong with Garza, but he revealed all in a YouTube video.

During a Q&A translated from Spanish, Garza revealed that he is going through treatment and he expects to be back between 7 to 15 days, but it could be up to 3 weeks. He suffered a small tear in his quad, but that’s much better a full tear. That would mean about 6 months on the shelf.

Garza explained how his injury came about in that tag team match. It didn’t occur during the Spanish Fly spot. Instead, Angel Garza injured himself afterward.

“My injury did not come from [the Spanish Fly]… An injury from the Spanish Fly could have been worse. Thank goodness that the injury came later and not from the Spanish Fly,” Garza revealed. “In the Spanish Fly, I landed on my neck. I was not standing fully right on the ropes and Montez Ford launched himself when I was still not fully planted on the rope. It was a matter of moments that my mind went like, ‘Spin’ and that’s the result that you saw [at Clash of Champions].”

“Unfortunately, the injury came afterwards. Montez went for a kick and I grabbed the kick. When I lowered it, I went for the knee, but I put in a little too much force into it. I thought when I was going to do it, [Ford] was a little too far from where I was and I didn’t measure myself properly. When I tried to stretch my leg towards him, the other leg that was supporting it couldn’t handle it and was stretched out too much,” Garza explained. “That’s when I heard a small pop, like a balloon exploding. Everything around that area started to get really hot and when I tried to move the leg, I had that tension close to my groin and it was my quadriceps, almost reaching my hip. That’s what I felt. The referee came to me and asked if I can continue and I said no.

“I remember giving Andrade the tag and he asked me what’s wrong and I tell him that I can’t go anymore. WWE has a system that’s really effective where they have all the doctors and medical personnel watching the matches on monitors and they quickly go to the ring to see what’s going on. I told them what I was feeling. The medical team sent me away to get it checked. I was asked if I could walk and I said yes, but couldn’t put any force down there.”

It’s possible that Angel Garza will appear during the draft next week, but his name will certainly be included in the list of Superstar available. His story with Andrade is not over either, but you also never know whose name will be called during the WWE Draft.

That to Carlos Toro for the transcription